The Duke and Duchess of Cambridge, Prince William and Kate Middleton, have been seeking advice from Chevening Scholars ahead of their upcoming trip to India and Bhutan.

A small group of scholars from the two countries were invited to a reception at Kensington Palace, home of William and Kate.

Scholars shared their tips on how to make the most of their countries, as well as talking with Prince William about cricket – the most popular sport in India.

Sushri Sangita Puhan, one of the Indian scholars who was invited to the Palace, told us of her excitement:

‘It is said that “life gives surprises when you least expect them”. Absolutely! And it is astounding when life throws a ridiculously unexpected and incredible surprise and you don’t know how to react. Exactly that happened to me when I received a personalised invitation from the Foreign and Commonwealth Office, mentioning that Her Majesty’s Government of the United Kingdom of Great Britain and Northern Ireland requests the honour of my company at a reception to mark the forthcoming official visit to India and Bhutan by Their Royal Highnesses The Duke and Duchess of Cambridge at Kensington Palace.

‘I read it again and again and it took me a while to believe my eyes. To affirm my belief, I searched for some information, and the royal couple’s forthcoming visit was all over the news. No words could do justice to my feelings and excitement at that moment. Immediately I confirmed my acceptance and waited to learn more.

‘As the day came closer, I received an explanatory mail meticulously describing the logistics and protocol, from greetings to dressing. Since it was a day to represent my country, I thought about attending in national attire, and I’m delighted when, towards the end in the long mail, it states that the Palace is very happy for people to wear the national dress if they wish.

‘Although the excitement was at its peak, still there was speculation that I might just be able to see the royal couple from a distance and that there would be limitations to actually interacting with them in a lofty gathering. With all anticipation and assumptions, I prepared myself to enjoy every moment in the royal palace.

‘On our arrival, we are welcomed by the Deputy Head of the India Foreign and Security Policy at the reception and escorted by staff to the venue. The officials of the Foreign Commonwealth Office make us feel ease and comfortable. It was surprising to see just a handful of people, perhaps 20 or so, including seven Chevening Scholars from India. The atmosphere was so relaxed and informal that I did not notice the presence of Her Royal Highness in the room while interacting with other invitees. Suddenly, I see an absolutely stunning and gorgeous persona having an engaging conversation with an invitee. She fills the room with her presence and greets everyone with a bright and radiant smile.

‘It was an absolute pleasure to see her so approachable and seemingly enjoying every moment. Her Royal Highness spent a long while talking to me, asking about my course (Childhood and Youth Studies), and my ambitions to help children in India upon my return. We also discussed the beauty of India, with Her Royal Highness particularly excited about sampling the culture. The Duke of Cambridge spent time with me too, and I have to say he has a great sense of humour. We spoke about cricket and the recent T20 World Cup, before telling me how excited he is to go there, as it is his first visit to our “beautiful” countries.

‘I am extremely delighted to share the wonderful evening with their Royal Highness the Duke and Duchess of Cambridge. The simplicity and humility of the royal couple is truly admirable. Prior to meeting them, I had a picture of them in my mind as very warm and approachable couple, and it’s an absolute pleasure to see they are just that in person. It was also wonderful to see their interest in our academic programmes, experience in the UK, about children in India, the country’s history and heritage, and much more.

‘It was a truly memorable experience, and I feel fortunate and honoured to be one of those lucky seven Chevening Scholars from India to witness the reception in Kensington Palace. I can not thank Chevening enough for the incredible moment and the lifetime opportunity which I will cherish forever.’ 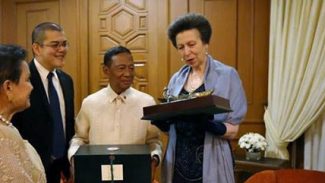 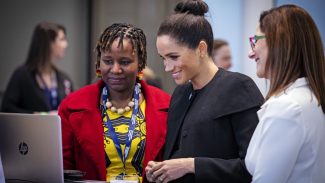 Duchess of Sussex joins Chevener on Skype call to Ghana

Networking is a constituent part of Chevening’s offer. Scholars are encouraged – even expected – to take advantage of their time in the UK to meet with people they wouldn’t usually encounter in their home countries, and exchange passions, hopes, and ideas with their new connections. Once in a blue moon, the person you’re exchanging ideas with might […] 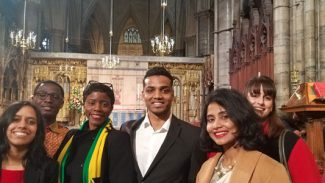 Celebrating the Commonwealth with royalty: A lifetime experience