For information about the new round of Chevening applications to study in the UK in 2019/2020, please read this.

The Chevening Secretariat is accepting applications for 2017/2018 Chevening Scholarships and some Chevening Fellowships via www.chevening.org/apply from 8 August until 8 November 2016.

Chevening Scholarships are awarded to individuals with demonstrable leadership potential who also have strong academic backgrounds. The scholarship offers financial support to study for a master’s degree at any UK university and the opportunity to become part of an influential global network of 46,000 alumni.

The call for new applicants follows the selection of some 1,800 scholars who won an award to study at a UK university this year.

These scholarships represent a significant investment from the UK Government to develop the next cohort of global leaders.

Speaking of the opening of the new application window, the Director of the Chevening Secretariat, Michael Scott-Kline, said: ‘Those who step forward to apply for a Chevening Scholarship are already demonstrating the kind of ambitious forward-thinking that typifies Chevening Scholars. The potential rewards for applying are unquantifiable. Not only do scholars receive a first-rate UK education which can open doors in their respective careers, they also join a strong global network — a network they will draw on and contribute to for the rest of their lives.’

Once succesfully selected, Chevening Scholars arrive in the UK where they experience the best Britain has to offer academically, culturally, and socially.

‘Scholars can choose almost any master’s course at any UK university,’ Louise Thomson, Programme Manager at the Chevening Secretariat said. ‘As well as an unparalleled academic experience, scholars enjoy exclusive access to year-round opportunities to familiarise them with the UK, its history, institutions, customs, and people.’

‘Recent scholars have taken in breath-taking views of the UK, experienced Britain’s heritage and history through its stately homes and castles, discussed international policy at the Foreign and Commonwealth Office, and interacted with high profile academics, politicians, and even royals at a range of academic, cultural, and social events. Whether they’re inside a lecture theatre or not, scholars are constantly learning.’

Applicants are reminded to check that they are eligible, and are urged to start applying for their courses as early as possible. The deadline for all Chevening Scholarships applications is 12:00 GMT on 8 November 2016, and the selection timeline is available publicly.

Michael Scott-Kline, Director the Secretariat, concluded saying: ‘Applying – or encouraging a friend to apply – may turn out to be the best decision you ever make. Everyone who has ever benefitted from being a Chevening Scholar has one thing in common — they had the ambition to simply apply.’ 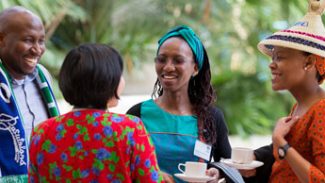 Scholars welcomed into alumni network at largest ever Farewell event

1,800 Chevening Scholars gathered at London’s iconic Alexandra Palace on Monday, 11 July to celebrate a successful year as part of the programme. It was a chance for scholars to say goodbye to one another, commemorate a year of study and cultural activities in the UK, and also to open up new opportunities as the […] 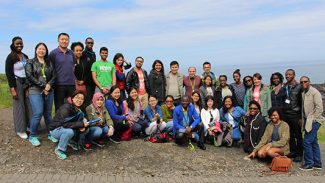 As part of the ‘Best of British presents…’ series, Chevening Scholars received a lesson in Northern Ireland’s politics and history at Stormont, before getting a chance to explore two of its most famous sites—Giant’s Causeway and the Carrick-a-Rede Rope Bridge—thanks to Queen’s University Belfast and Ulster University. The day began with a tour of Northern […] 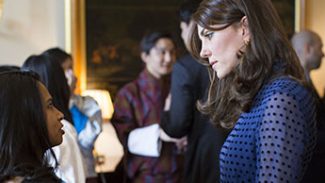 The Duke and Duchess of Cambridge, Prince William and Kate Middleton, have been seeking advice from Chevening Scholars ahead of their upcoming trip to India and Bhutan. A small group of scholars from the two countries were invited to a reception at Kensington Palace, home of William and Kate. Scholars shared their tips on how to make the […]