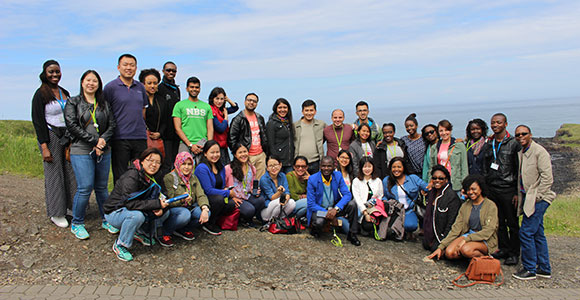 As part of the ‘Best of British presents…’ series, Chevening Scholars received a lesson in Northern Ireland’s politics and history at Stormont, before getting a chance to explore two of its most famous sites—Giant’s Causeway and the Carrick-a-Rede Rope Bridge—thanks to Queen’s University Belfast and Ulster University.

The day began with a tour of Northern Ireland’s Parliament Buildings, also known as Stormont, which is home to Northern Ireland Assembly. Throughout the tour, scholars received a detailed account of the building’s rich history, and sat in the very rooms where laws around housing, employment, education, and health are discussed.

Following the tour, the scholars travelled to Queen’s University Belfast to hear talks about Ireland’s culture, traditions, and history of conflict. Dr Dominic Bryan of Queen’s University Belfast discussed the politics surrounding nationality, while Claire Hanna discussed her role as a Member of the Legislative Assembly for Belfast South. Dr Duncan Morrow of the University of Ulster, who specialises in community development and reconciliation, finished off the afternoon with a talk about community building in a post-conflict society.

‘The question of what peace is is an interesting one. There are at least two answers: the first is that peace is the absence of violence, but if you are actually going to live and work together, peace has to be the presence of a relationship,’ said Dr Morrow.

‘To have survived 30 years and still be looking for a future together is, in many ways, a huge achievement.’

During a brief Q&A session, many scholars took the opportunity to draw parallels between the conflict in Northern Ireland and that in their own countries. They then moved onto a networking reception, where they had an opportunity to discuss the day’s learnings with one another.

On the second day, scholars had an opportunity to explore Giant’s Causeway, a UNESCO World Heritage Site. Located in the county of Antrim, it was created as a result of a volcanic eruption 60 million years ago. Today, tourists from around the world visit Giant’s Causeway to experience the UK’s fourth greatest natural wonder.

The day ended at the famous Carrick-a-Rede Rope Bridge near Ballintoy. The bridge, which is suspended 30 metres above water, leads to Carrick-a-Rede Island and was erected by salmon fisherman in 1755. One by one, the scholars took the opportunity to cross the bridge and take in the views from the top of the island.

Rani Suléman, a Chevening Scholar from Canada, said the trip was an excellent opportunity to bond with fellow scholars.

‘Visiting Northern Ireland was more than just appreciating its vibrant cities, lush landscape, and rugged beauty. It was learning about its rich history while forging strong relationships with my fellow Cheveners from around the globe.’ 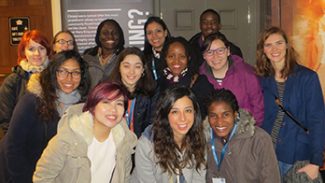 More than 55 Chevening Scholars headed to Scotland to explore the hidden passageways beneath the city of Edinburgh.  At the ‘Mary King’s Close Underground Tour of Old Town Edinburgh’ event, scholars were given a unique opportunity to visit an important and famous part of Edinburgh’s history, hearing tales about the plague, pestilence, and murder. Social […] 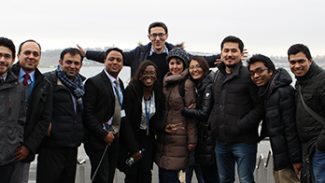 Chevening Scholars took a first-hand look at political devolution in Wales, as they visited the National Assembly for Wales in Cardiff. As part of the ‘Best of British presents…’ series, scholars were treated to a day of language, culture, and politics, thanks to our partners – Cardiff University. To kick off the day, scholars were welcomed to […] 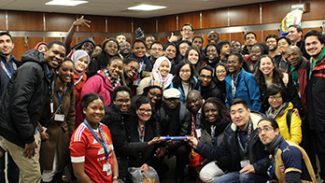 Chevening Scholars from across the UK were lucky enough to visit Old Trafford, home to Manchester United Football Club. Often referred to as the ‘Theatre of Dreams’, Old Trafford is one of the most famous grounds in world football, and has hosted some incredible matches with incredible players. The likes of David Beckham, Ryan Giggs, […]