Being gay in the Diplomatic Service: a personal account

‘The past is a foreign country’. That foreign country, which James Southern examines in this fascinating and challenging essay, is the one I lived in from 1968, when I joined Her Majesty’s Diplomatic Service from university at the age of 21, until I left 35 years later.

‘So, Mr Wall, have you ever had any homosexual experiences’? I had just started at the Foreign Office and this was my Positive Vetting (PV) interview. If I passed, an interesting career beckoned. If not, my career would end before it had started. ‘Yes’, I replied, ‘fooling around with other boys at boarding school when I was 10’. Indulgent laughter from my interrogator. ‘And do you have any homosexual tendencies?’ I knew I was sexually attracted to other men. But was a ‘tendency’ the same thing as a ‘temptation’, my Roman Catholic conscience asked myself? Temptation was no sin. It was giving in to it that was the sin. This was a temptation to sin I would never give in to, so I told myself. ‘No I do not’, I replied.

As James Southern explains, the FCO never went in for the intensive and intrusive scrutiny of private lives undertaken by the Americans. My PV referees (my father’s best man and my RC parish priest) gave me a glowing report. I was in.

I spent my career, firstly denying my sexuality to myself and, once I had admitted it to myself, regarding it as something to be suppressed: a secret to be taken to the grave for the sake of my family, my faith, and my career. Even as late as 1991, when John Major lifted the ban on gay men and lesbians working in the Diplomatic Service and appointed me as the UK Ambassador to the EU in Brussels, I do not believe he would have felt able to make that appointment if I had then been openly gay. 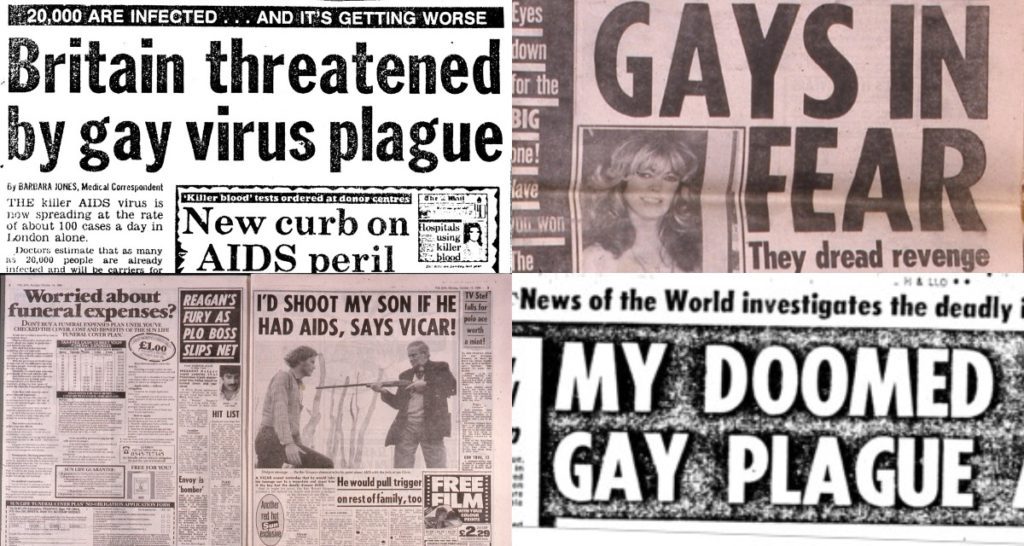 I look back now, rather as we look back at child labour or the denial of equal rights to women, and ask myself how the FCO could have been so hidebound and why I was not braver. But it never occurred to me to challenge the orthodoxy. At one moment in my career, in Paris in the early 1970s when the attractions of my own sex pressed on me insistently, I considered leaving the Service. I ruled it out. I was a practising Catholic. I dreaded coming out to my parents. The legal tolerance of sexual relations between consenting adults in private merely underlined that homosexuality was seen as abnormal and perverse. Few walks of life accepted homosexuality as a normal difference. One of my university friends concealed his sexuality throughout his successful career in the knowledge that his survival as a head teacher depended on it. Even in the 1980s, Margaret Thatcher could introduce Clause 28 because it chimed with public opinion. Read the British tabloid newspapers at the height of the AIDS crisis and you will find the cruellest characterisation of its victims as disgusting perverts. Michael Cashman’s first ever gay kiss on British television laid him open to abuse in The Sun and in public.

The Foreign Office that I joined in 1968 still bore the scars of the Burgess and Maclean cases. In their aftermath, the Americans had questioned our reliability as an Intelligence partner. In no circumstances would a British Government, and therefore Foreign Office officials, put that relationship at risk again. Our job was to represent British interests overseas on the instructions of British Ministers. We were, as James points out, well aware that we were perceived as toffs, living it up in overseas luxury. There was no media sympathy for the hardship of families separated, and the careers of spouses terminated, because of the exigencies of a Service which required us to go wherever and whenever we were posted, with little say on either count. It never occurred to most of us that our duty to lead extended beyond the pursuit of a broadly ethical foreign policy – albeit one that was consequently challenged by the demands of realpolitik.

James quotes the submission made by the then Permanent Under Secretary at the FCO, Patrick Wright, to FCO Ministers in 1990 recommending the lifting of the sexuality ban. The minute is circumspect because Wright was anticipating the likely caution of British Ministers whose first point of reference in measuring public opinion was The Sun, the newspaper which even Tony Blair thought it necessary to woo on his way to a landslide electoral victory six years later. The conservatism of Sir Humphrey Appleby, the civil servant caricature from the television show Yes, Minister, is recognisable enough in reality. The notion of Sir Humphrey leading hapless politicians by the nose is not. The official machine responded then, as it does now, both directly and intuitively to the instincts and wishes of Ministers. 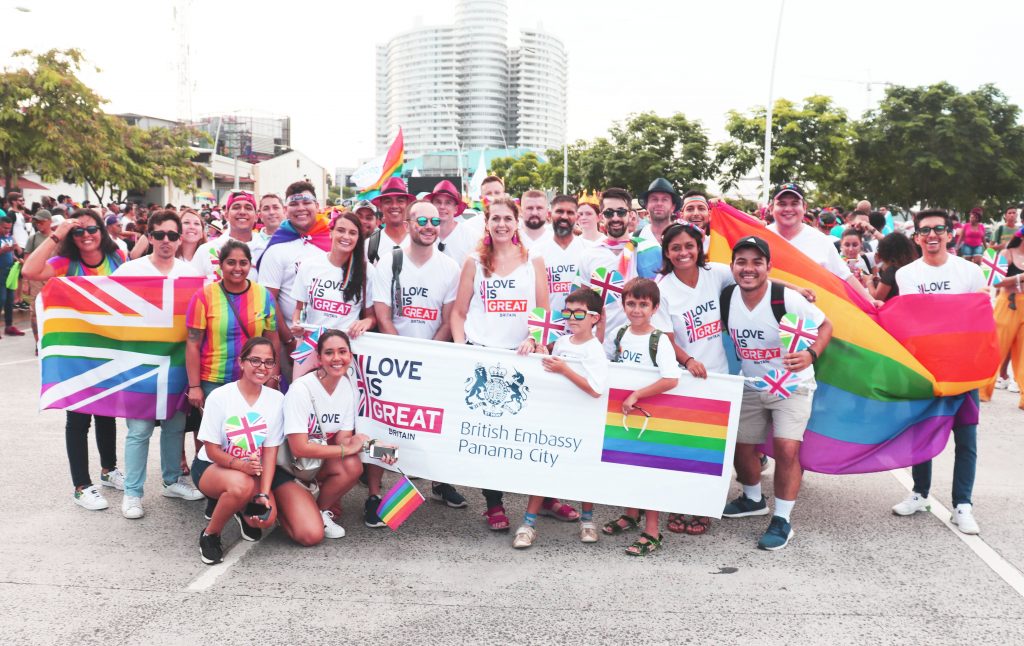 Two years ago, I marched, relaxed and confident, with other gay and lesbian Civil Servants, including a group from today’s FCO. In its social attitudes, today’s Foreign Office is in step with majority public opinion in Britain. Yesterday’s Foreign Office too was in step with majority opinion. Then, we lived in a homophobic country. Now, by and large, we do not. As Civil Servants, we were never going to be pioneers of social reform. I did not find it easy knowing I was a gay man in an organisation where to be gay was a sacking offence. But the Service required levels of commitment and self-sacrifice, especially from the spouses of British diplomats, which were also onerous and harsh in their own way. We stuck with it. Why? Well, partly fear in my case. But also because we were committed to serving our country and strove to do so to the best of our ability. I am proud of that. And delighted that, today, people like me in the Diplomatic Service can be proud of being gay too.

Foreword written by Sir Stephen Wall, a former British Ambassador who concealed his homosexuality for his entire diplomatic career, and extracted from the FCO report titled, ‘Homosexuality at the Foreign Office 1967-1991’ by James Southern. You can read the full report here. 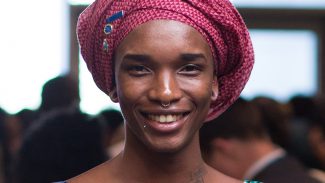 Chevening interviewed current scholar Katlego Kai Kolanyane-Kesupile from Botswana about LGBT History Month and what it means to her. Katlego is currently pursuing a Masters in Human Rights, Culture and Social Justice at Goldsmiths, University of London and provides a valuable insight into LGBT, and particularly trans, visibility and rights, her own story, and the events on offer […] 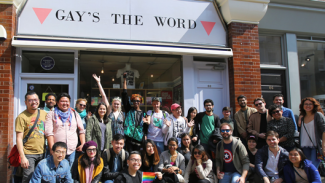 Chevening’s first ever LGBT-themed event saw scholars learn about the story of London’s LGBT community through an historical walking tour of the city, organised by LSE scholar John Shen. The event was organised as part of Chevening’s scholar events competition, which gives scholars a chance to pitch to organise an event for their fellow scholars. […] 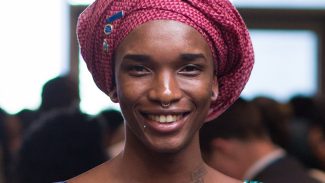 How one Chevening Alumna is bringing queer pride to her village

Chevening class of 2016 Alumna Katlego Kai Kolanyane-Kesupile studied a Masters in Human Rights, Culture and Social Justice at Goldsmiths, University of London before returning to her native Botswana where she continues to advocate for LGBT+. Titled, ‘How I’m bringing queer pride to my rural village’, she recently gave a talk through TedGlobal where she […]