Tobias Ellwood, Minister for Pakistan, welcomed all Pakistani Chevening Scholars and Fellows to the Foreign and Commonwealth Office at a reception that served to emphasise the importance of the relationship between the UK and Pakistan.

Mr Ellwood’s speech focused on the deep ties that are shared between the UK and Pakistan, citing that the UK is home to the largest Pakistani diaspora community in the world, and that 7,000 international students from Pakistan are currently studying in the UK. The educational exchange that Chevening brings about, he said, helps to cement those ties.

‘When I visited Pakistan [in September 2015] I saw an impressive country building a bright and prosperous future,’ he added, before suggesting that Chevening Scholars and Fellows should use their free time whilst on award in the UK to visit all corners of the country – including his own constituency of Bournemouth East – and to take in all aspects of British culture.

‘We want to share the best of British with you, and that is why we at the Foreign and Commonwealth Office are so proud of Chevening. I want you to enjoy the benefits of being a student in the UK. You build bridges and broaden outlooks by sharing your experiences with fellow students. Make the most of your programme. Make the most of the opportunities that this country has to offer, and make the most of the amazing networks that you will build starting here tonight.’

Fantastic to see so many bright #Chevening scholars last night from #Pakistan studying in the UK. pic.twitter.com/WcqVNgZAhv

Pakistan’s High Commissioner to the UK, H.E. Syed Ibne Abbas, also addressed scholars, echoing Minister Ellwood’s comments about taking advantage of all that the UK has to offer. He was also keen to relay to the scholars and fellows present that Pakistan was continuing to undergo ‘great change’ and identified Cheveners as potential agents of positive change.

‘It’s also a great responsibility on all of you,’ he emphasised, as he reminded those present that they are following in the footsteps of the many Pakistani ‘great leaders’ who have studied and upskilled in the UK.

‘There is a great change going on in our country and you have a responsibility to contribute your share to that. With your share, we will be able to take large leaps forward,’ he concluded, thanking the UK government and the people of the UK for providing this opportunity to talented Pakistanis.

Chevening Scholar Usama Khiliji, studying Comparative Politics at the LSE, has already connected with fellow Chevening Scholars to plan what he can contribute on returning: ‘I’ve already spoken to so many people about collaborating on projects once we get back home. My long term goal is to work on civic education reforms in Pakistan, as there’s not much democratic awareness. Developing a civic education curriculum that can be integrated into the Pakistani educational system – that’s something I want to start working on.’

Shiza Malik, a Chevening Scholar studying Media and Development at SOAS, added: ‘The most memorable aspect [of my Chevening experience] has been meeting the people I’ve met through this programme. For example, there’s a Chevening Scholar from Syria who’s become a very good friend of mine, and what I’ve learned from her I could never have learned in one of my classes.’

The number of Chevening Scholars and Fellows from Pakistan on award in the UK trebled in 2015/2016, compared to the previous year – a clear demonstration of the UK’s commitment to further strengthening bonds between the two countries. Part of this increase is due to the journalism fellowship’s re-expansion to enable Pakistani media practitioners to undertake the South Asia Journalism Programme alongside their Indian peers. Nazish Zafar, who is a producer for GEO News’ flagship current affairs programme ‘Capital Talk’, spoke of her desire to use her time in the UK to explore the role sport can play in easing political conflict, and is looking forward to putting her fresh ideas into practice on returning to Pakistan.

When they return home, scholars and fellows will join the Chevening Alumni Association of Pakistan, which launched in 2014 with the aim of mobilising the 1,300+ Pakistani Chevening Alumni to create alumni-led solutions to various issues relating to the social, economic, and the broader development of Pakistan. 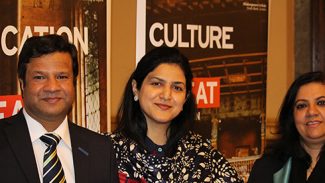 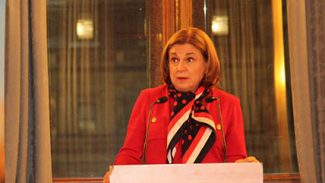 Over a hundred Chevening Scholars from North and Central America attended a reception hosted by the Americas Directorate at the Foreign and Commonwealth Office. Chevening Scholars were joined by ambassadors and senior diplomats from the Caribbean, Central America, and Mexico. Hugo Swire, the Minister of State at the Foreign and Commonwealth Office, opened the networking event with […] 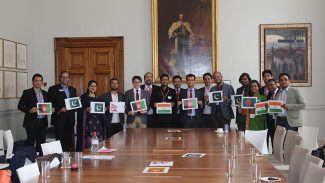 In a culmination to a series of scholar engagement events that have taken place across the 2014/2015 cycle, the South Asia Afghanistan Directorate (SAAD) at the Foreign and Commonwealth Office (FCO) hosted a farewell afternoon tea for the South Asian and Afghan Scholars. Around 20 of them participated in roundtable discussions giving scholars from Pakistan, India, Nepal, […]