1,900 Chevening Scholars from 140 countries – the entire class of 2016 – were officially welcomed to the UK at a lively and inspiring Chevening Orientation event hosted by the Foreign and Commonwealth Office (FCO). Addressing the scholars, the Foreign Secretary, the Rt Hon Boris Johnson MP, emphasised that the UK is open to talented people from all over the world.

Chevening Orientation is the biggest and most prestigious event in the Chevening calendar – an opportunity for all scholars to meet each other for the first time and to begin building networks that will last a lifetime.

Scholars are introduced to the FCO, the Chevening Secretariat, and Chevening’s partners. Throughout the day they hear about the opportunities available to them at the start of their year in the UK, and learn what is expected of them as the newest members of a respected global network, 34 years old and 46,000 strong.

Scholars were given a warm welcome to Orientation by Eve Sadler, Head of Strategic Partnerships, Soft Power and Public Diplomacy at the FCO, who introduced the day’s speakers to the stage.

Secretary of State for Foreign and Commonwealth Affairs, the Rt Hon Boris Johnson MP, assured scholars that they had done ‘overwhelmingly the right thing in picking this country for your studies’, citing that three of the world’s top ten universities were in the UK. He also spoke about key national characteristics that spark innovation in Britain, including open access for international talent, intellectual freedom, and a vibrant cultural scene.

He concluded his speech with a selfie with all 1,900 scholars in the auditorium from the stage.

Our MC Eve Sadler and @BorisJohnson from the @foreignoffice take a selfie with 2,000 people! #IAmChevening pic.twitter.com/fYz7tX3Jpp

The Prince of Wales delivered a special video message to the audience from Clarence House. He urged scholars to use their energy to tackle urgent global problems, and encouraged them to keep in touch with the UK throughout their future careers as Chevening Alumni.

Prince Charles said: ‘I have been lucky enough to meet many members of this elite community of Chevening Alumni on my travels around the world.

‘Like them, many of you will doubtless take on leadership roles in your countries and your professions. You will play an important role in tackling the daunting challenges that our world faces.’

Scholars then heard from Lord Karan Bilimoria, founder of Cobra Beer, chancellor of the University of Birmingham and a former international student in the UK. Lord Bilimoria shared personal stories and advice on the personal qualities that lead to success from his time as a student of law and business, as well as from his working life as an accountant and then entrepreneur.

Be humble and yet ambitious. Be ‘humbitious’. Wise words from Lord Karan Bilimoria #IamChevening

After a break for lunch, Cassandra Stavrou, entrepreneur and founder of British popcorn brand Propercorn delivered an inspiring speech on her personal journey in business, stressing the importance of human connection when working with staff, suppliers and customers.

You can create great things, as long as you do things properly. From tech to popcorn. Great talk from Cassandra. #IAmChevening pic.twitter.com/EGgePu7535

“If moderation is fault, then indifference is a crime.”
However, virtue, integrity and passion are not moderate.
– Stavrou. #iAmChevening

Alison Barty, Head of Student Advice and Wellbeing from the School of Oriental and African Studies, and Sibusiso Sgwane, a 2015/2016 Chevening Scholar from the University of Birmingham gave practical advice on how scholars should take care of themselves and make the most of the programme in the year ahead.

Scholars then received essential scholarship information from Frankie Clarke and Morna Firth, senior programme officers at the Chevening Secretariat. They gave an exciting preview of some of the year’s forthcoming events, including a Best of British trip to Blenheim Palace, and weekend business retreats at Cumberland Lodge.

Senior Programme Officers Frankie and Morna talk about the many events scholars can participate in during their year in the UK #IAmChevening pic.twitter.com/fPaiHr6iyr

Hugh Elliott, Director of Communication for the FCO, highlighted the contributions of over 120 Chevening university and corporate partners to the Chevening programme. He also announced the winner of the #MyCheveningHome photography competition – a beautiful image captured by Pedro Henrique Souza while he was out jogging in London’s Kensington Gardens.

Master of ceremonies Eve Sadler concluded the day by inviting scholars to a networking reception where they could met Chevening Alumni and Partners, and members of the 100 reading committees who selected their applications for a Chevening Scholarship, from among tens of thousands, to study in the UK.

Before the afternoon’s keynote speeches, scholars chose to attend one of six interactive panel sessions themed on future developments in their area of study in the UK.

Scholars also got the chance to meet their programme officers during the day and take photographs on board the vintage red double-decker bus in the main hall. Social media shots were made special by #Chevening Instagram boards and #IAmChevening place cards brought groups together in anticipation of an exciting year ahead.

‘Orientation 2016 was the largest event the Chevening Secretariat has put on to date. 1,900 people from 140 countries around the world – scholars, partners, and those who work hard to make Chevening a reality – played their part in what is a formative day in the life of a Chevening Scholar.

‘Sharing this space with fellow scholars from the class of 2016, FCO staff and our roster of prominent and influential speakers makes the dream of gaining a world-class UK education in the UK a reality. The speakers who took to the stage today were inspiring and we hope that this will be the start of a year that scholars will remember for all their lives.’

Applications for Chevening Awards in the 2017/2018 academic year are closing in two weeks at 12:00 GMT on Tuesday, 8 November 2016. We are looking for ambitious and academically strong professionals who have displayed leadership potential. If you want to be part of next year’s Chevening Orientation, apply now. 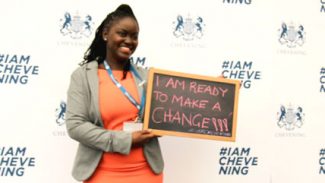 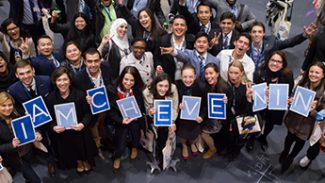 Scholars welcomed to the UK at Chevening’s biggest event yet

1,800 Chevening Scholars were officially welcomed to the UK at an inspirational welcome event hosted by the Foreign and Commonwealth Office (FCO) at ExCeL London.  The Orientation Day, the largest event in the Chevening calendar, is an opportunity for all scholars to meet each other for the first time and to start building networks that […]

More than 600 Chevening Scholars have come together at the 2014/2015 Orientation Event held on Saturday 25 October at Queen Elizabeth II Conference centre. Welcomed by the Foreign & Commonwealth Office, scholars had the opportunity to meet their programme officer and participate in a wide range of activities throughout the day. They learned about their […]