Scholars do their bit to make London a greener place

A group of enthusiastic Chevening Scholars fought sub-zero temperatures last Sunday morning , as they planted trees for the city of London.

Anushka Gurnaney, a Chevening Social Media Ambassador, went along to do her bit, and she tells the story below.

‘Bundled up in warm jackets, gloves and sturdy boots, we made our way to King George’s Field in Southall, where the activities of the day were scheduled to take place. Organised by Ealing Council in partnership with NGO Trees for Cities and Unilever, the aim was to plant 5000 new saplings in a single day.

The event was part of Mayor Boris Johnson’s larger efforts to make London a greener place by planting 40,000 new trees all over the city. His new iTree urban forest survey shows that London has 8 million trees that are worth a whopping £6.1 billion to the economy, and contribute £130 million in wider benefits. These include the amount of pollution that tree foliage helps combat, their carbon dioxide storage levels and their rainwater holding capacities.

Trees for Cities’ biggest project till date, the day was just the first phase of a plan to plant a total of 20,000 edible plants and trees in King George’s Field alone. These would eventually provide cleaner air to breathe, a better climate, a greener borough and happier and healthier lives for local residents.

The task for the Chevening volunteers was fairly simple  – we were enrolled and assigned to alphabetically organised plots of land where a Trees for Cities representative walked us through the tree-planting process. So armed with thick gloves, shovels and wheelbarrows provided by the organisers, we squelched our way to our designated grassy squares. Lawrence, our guide, showed us how to dig up patches of earth, stick a sapling in, pack up the hole once again and then ‘mulch’ (a process of spreading bark chippings over the freshly planted saplings) each stem.

Whoever thought the arduous task of shoveling was just for the guys has obviously not met some of our Chevening ladies before! In a matter of minutes everyone had their hands down and dirty in the mud. While some wrestled with the job of making holes in the ground, others planted delicate saplings in them. Several volunteers even pushed wheelbarrows full of bark chippings back and forth to aid the mulching process. It was teamwork at its very best.

Four long but fun hours later, despite the biting cold, muck in our shoes and exhaustion from all the hard work, 5000 freshly planted saplings quivered victoriously in the windy King George’s Field.’

Interested in volunteering with Chevening? See what opportunities are available. 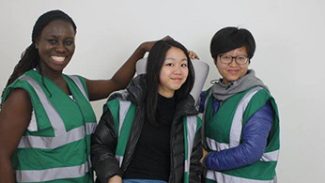 More than £4,000 worth of clothing can now be sold by Oxfam thanks to a group of Chevening Scholars. The group visited the Oxfam Southern Logistics Centre, to assist with uploading items of clothing to the Oxfam website. Clothing, which arrives in bulk on a daily basis, needed to be sorted, photographed, labelled and finally […]