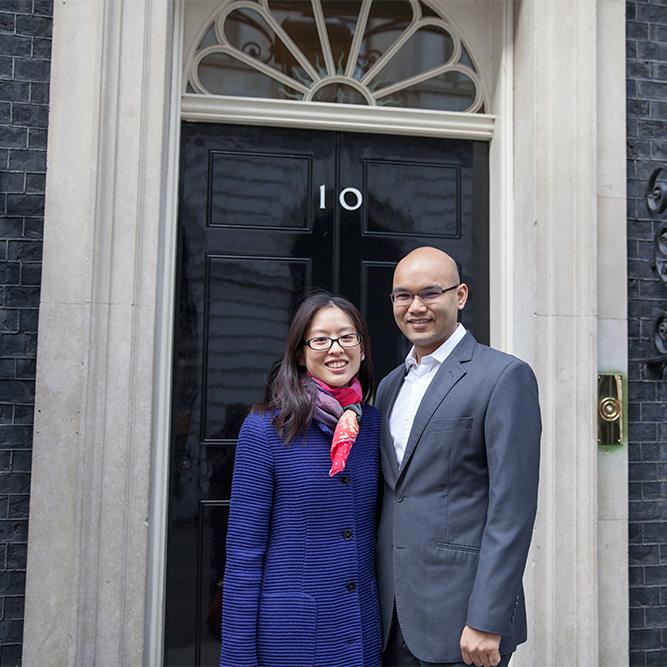 As the winner of the Tea at No. 10 competition, Malaysian scholar Aimran Amir toured the famous No. 10 Downing Street, residence to British Prime Ministers since 1735, and enjoyed a cup of tea in one of its beautiful dining rooms.

The competition ran in partnership with the GREAT Campaign and the prize was tea at No. 10 Downing Street for a scholar and their guest. Scholars were asked to submit photographs that show their Chevening experience and education in the UK. The GREAT panel chose Aimran’s image of sunny Cornwall from a pool of over 1200 entries; Conrad Bird, director of GREAT Campaign, commented:

‘It is a brilliant example of the kind of surprising and unexpected destinations visitors can find in the UK. We chose this as the winning photograph as we thought it shows the variety of the cultural experiences available in the UK, as well as offers a small glimpse of the incredible British coastline which visitors can enjoy in a range of different ways!’

Amir shared his thoughts on this experience:

‘When I found out that the prize for winning the Chevening photo competition was the chance to have tea at 10 Downing Street, I knew I had to participate! My winning photo was taken on a trip to Cornwall in October 2014. I was stunned by the magnificent views that Minack Theatre had to offer and the majestic cliffs overlooking the Atlantic. This picture showcases the wonderful sights that can be experienced in the UK that are off the beaten path and the perfect weather, not what comes first to mind when you think about the UK! I was truly inspired by the history of the theatre and how it was built amid the chaos of war, all due to its indomitable founder, Rowena Cade.Fresh out of his shipping finance exams, Amir took some time to share his thoughts on this experience:

I was thrilled to find out that I won. Who wouldn’t be? 10 Downing Street has hosted some of the most notable individuals throughout history. I had the opportunity to have a private tour. We met Larry (Chief Mouser to the Cabinet Office), as well as the Olympic torch and medals on display. We admired many beautiful works of art and historical artefacts from the Government Art Collection. I came across the sofa that belonged to Winston Churchill, one of the greatest leaders of all time. The highlight of the tour was visiting the Cabinet room, where some of the most important decisions affecting Britain and the world over the last 3 centuries have been made.

Overall, Chevening has been a wonderful experience. Not only has it enabled me to learn from some of the world’s best ship finance experts at Cass Business School but to develop friendships with other scholars with similar passions and goals in life. Experiencing the tremendous sites that the UK has to offer is the icing on top.