From 8 to 15 March 2016, Chevening Scholar Sandra Camacho Otero visited the Fukushima Prefecture in Japan as part of a select University College London (UCL) delegation. The delegation, which included six scholars from UCL’s Institute for Risk and Disaster Reduction, was on site to explore the current state of reconstruction in the area, five years after the Tōhoku earthquake, and subsequent tsunami that led to the Fukushima Daiichi Nuclear Power Plant accident.

Originally from Mexico, Sandra is currently doing her master’s degree in Risk, Disaster and Resilience at UCL as part of Chevening’s 2015/2016 cohort. During her time in Japan, she met Governor of Fukushima Prefecture, Masao Uchibori, and visited multiple sites to learn about current strategies to address issues such as food security. The group also had an opportunity to hear from survivors, as well as access the power plant and various temporary housing sites.

Aside from learning about the government’s decontamination efforts, Sandra said the visit also gave her insight into how the locals are working together to revitalise the area.

’Visiting the Fukushima Prefecture gave me the chance to not only visit the nuclear plant itself and see the technical efforts to decontaminate the area, but also gave me the opportunity to talk to people and learn about the local efforts to revitalise the place, sell their products, and build resilience in situ.’

The government of Fukushima Prefecture has a number of initiatives planned to help continue the restoration of this area, including the building of 4,890 housing units for evacuees. It is also continuing infrastructure development work, and has implemented a programme to protect both the physical and mental health of citizens, including the provision of radiation and thyroid tests to help prevent cancer.

However, the biggest restoration efforts have been focused on agriculture, forestry, and fisheries, since the livelihoods of those affected greatly depend on these sectors. Decontamination work on farmland, strengthened inspection systems, enhanced food labelling, and radiation metres are just some of the new measures in place.

Although Sandra acknowledges the human responsibility in the Fukushima Daiichi disaster, she says her visit has allowed her to appreciate all of the work that has been done by both the government and citizens in the aftermath.

Sandra also wrote about her experience for The Mexican Times, in which she concluded: ‘Humans were responsible for this tragedy… However, I believe that Fukushima needs encouragement not constant criticism.’

Read her article in full (in Spanish) here: http://themexicantimes.mx/a-cinco-anos-de-fukushima/ 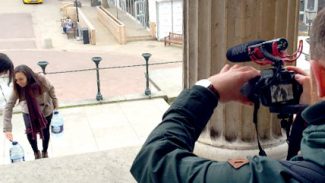 ‘We can no longer be passive’ was the call from Chevening Scholar Yahoska Berrios on World Water Day 2016. The Nicaraguan scholar fronts a video aimed at the Chevening community which calls for greater efforts to help improve access to water for rural communities, given that the lack of water has a disproportionately negative effect […] 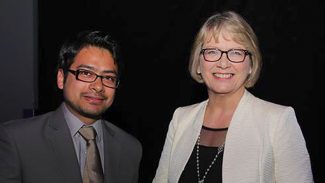 We are delighted to announce that Chevening Scholar, Yasir Mehdi, was the recipient of a 2016 ‘Enriching Student Life Award’. Commonly known as ELSAs they are awarded by Cardiff University Student Union (CUSU) to acknowledge the students and staff who have contributed to enriching the university campus. Yasir was one of four students shortlisted for his particular […] 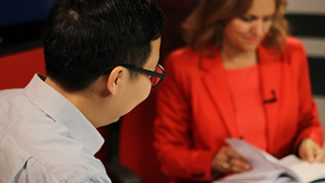 The Chevening Workshop series continued, as 19 scholars took part in an exclusive media training workshop using the world class facilities at the University of Salford. Put on to give those that are either media practitioners, or interact regularly with the media in their professional lives, the chance to improve their skills, the scholars had access to Media City – home to […]