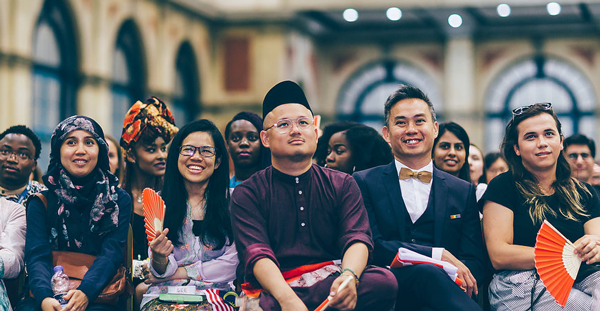 Chevening marked a special moment in its history at the 2018 Farewell event as the global network of Chevening Alumni reached 50,000.

1,649 departing Chevening Scholars came together to celebrate a year as part of the programme on Wednesday, 4 July at London’s iconic Alexandra Palace.

Although Farewell 2018 marks the end of the year for the class of 2017, it also celebrates scholars’ entry into an exclusive and influential alumni community. As the Chevening Scholarships programme enters its 35th year in 2018/2019, the Chevening Alumni, a global group of leaders and influencers, rises to 50,000.

Friendship, and all that jazz

Scholars arrived at Alexandra Palace, greeted by the sounds of The London Brass Quintet playing a selection of well-known British and jazz classics. The sun was shining brightly on north London and scholars were reunited with friends from around the world who they’d met in the past nine months. 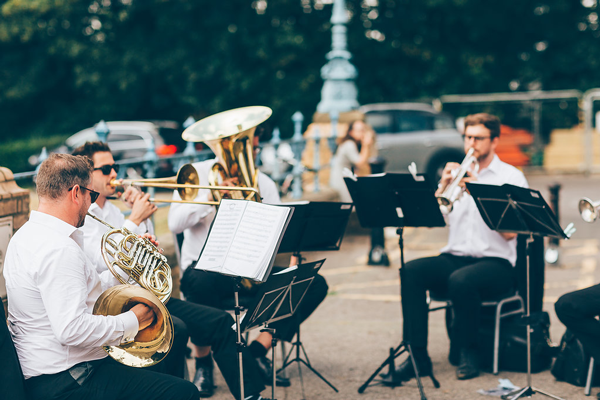 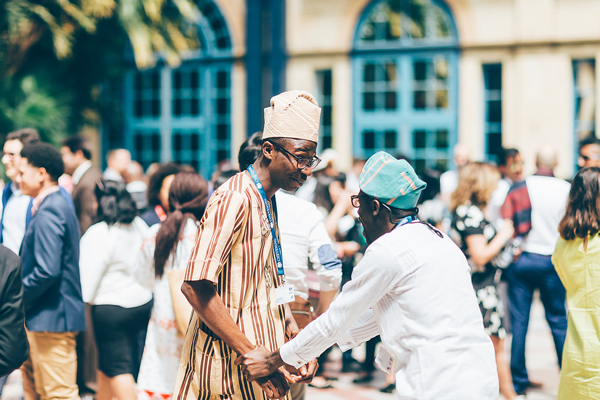 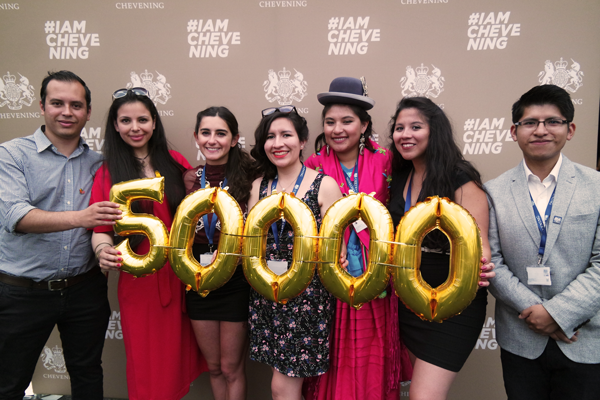 They were joined by Chevening Alumni, representatives from partner organisations, staff from the Foreign and Commonwealth Office (FCO), and the Chevening Secretariat.

‘International friendships open up our lives’

The formal proceedings of Farewell were opened by Anne Marie Graham, Director of the Chevening Secretariat. She said: ‘You’re about to enter the global network of Chevening Alumni and make your own impact around the world.

Baroness Falkner of Margravine then delivered the Farewell keynote speech. A politician and member of the House of Lords, Baroness Falkner was born in Pakistan, but grew up and was educated in the UK.

She spoke on leadership, success, and cultivating an international outlook, saying: ‘To have friends and acquaintances from all over the world is a hugely enriching experience. International friendships open up our lives.’ 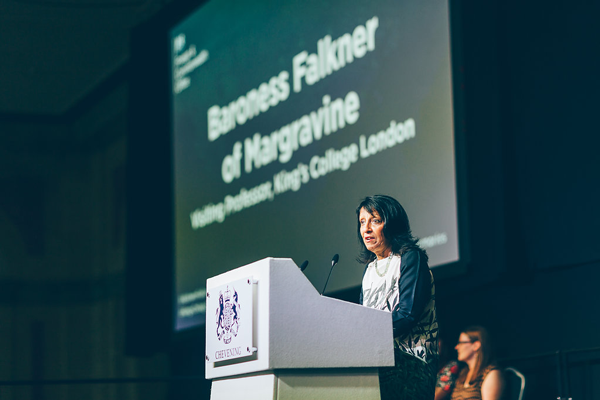 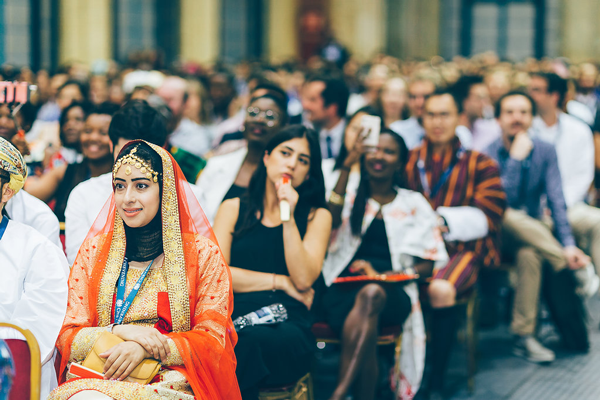 ‘The fellowship of learning, creating, and growing together’

Scholars then heard from Kevin M Isaac, High Commissioner of St Kitts and Nevis to the UK (and a former Chevening Scholar), who shared observations and thought-provoking ideas with the assembled scholars.

‘Chevening is not just about scholarships, but about fellowship, he said. ‘The fellowship of learning, creating, and growing together. It is a network which recognises young leaders and influencers and rewards them with the opportunity to tackle, as change agents, the issues that affect their home countries and the world.’ 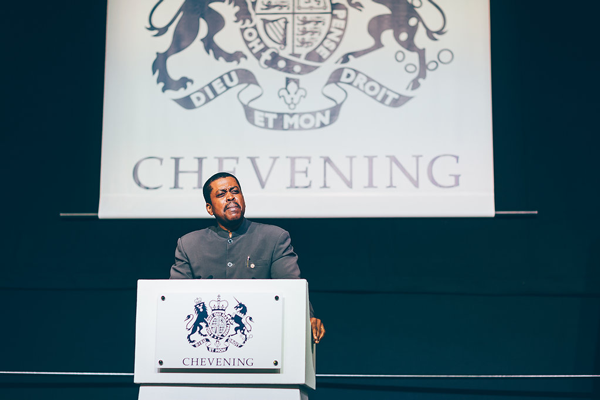 The High Commissioner then read out the winning poem in the Chevening Poet Laureate of the Year competition, ‘The “best” lesson’, penned by Deeksha Gautam. Deeksha is studying Development Studies at the University of Sussex, and her poem focused on what she had learnt in the UK this year, both inside and outside the classroom. 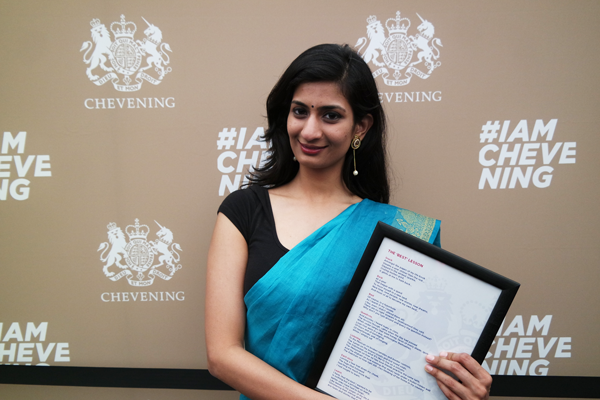 Scholars were encouraged to keep in touch with the UK, and with one another, by Aba Quartey, Alumni Relations Manager at the Chevening Secretariat. Aba highlighted the opportunities available to alumni, including Chevening’s online platform, Chevening Connect.

She said: ‘With Chevening you are only one handshake away from your next exciting collaboration, one click away from professional advice, and one moment away from achieving your dreams.’ 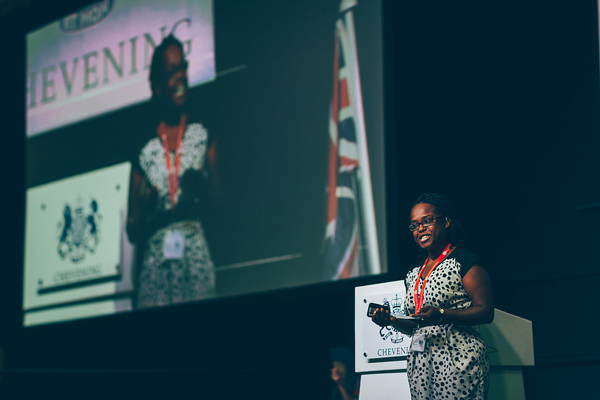 ‘One moment away from achieving your dreams’

‘Carlos Alvarado was where you are now nine years ago. He was just finishing his master’s on a Chevening Award. Today he is President of Costa Rica at the age of 38.’

Ben Coates, Head of Scholarships at the FCO, brought the proceedings to a close and said: ‘Every single one of you was chosen as a Chevening Scholar because of your leadership potential, because you demonstrated to us that you are people who would go on to do great things with your careers. The UK is a better place for having Chevening Scholars here.’

Ben Coates then formally ended the 2017/2018 Chevening Relay, inviting two scholars to the stage to ‘cross the finish line’ accompanied by the Chariots of Fire theme.

The Chevening Scholar Relay started in November and has been taking place throughout the year, with the aim of encouraging scholars to collaborate, network, travel, be creative, and take collective responsibility for a common goal.

Scholars were set the challenge at the start of the year of taking the batons to 52 locations around the UK, receiving points for visiting places specified on the list. The red baton won this challenge, and both batons were kept busy, going as far north as Inverness, as far south as Penzance, as far west as Bangor, and as far east as Norwich.

The day ended with a networking reception on the terrace of Alexandra Palace, providing spectacular views of London. Scholars captured their final UK #CheveningMemories against this backdrop, and discussed, over drinks and canapés, what it means to be part of a global network of 50,000. 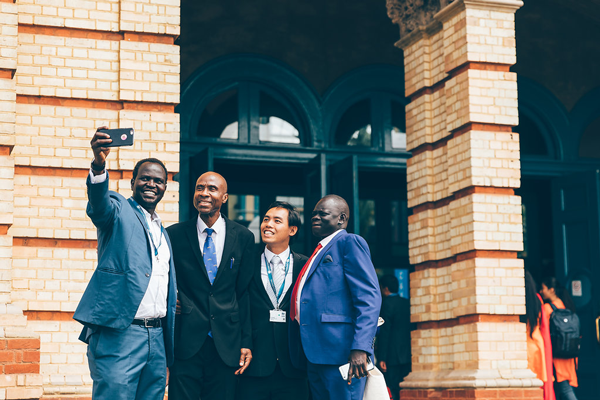