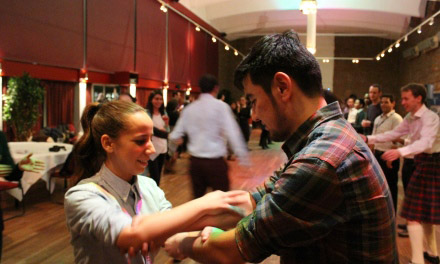 More than 80 scholars travelled to Edinburgh for the inaugural Chevening Burns Night celebration.

In collaboration with the University of Edinburgh, the scholars were treated to a fun evening of traditional Scottish poems and dancing at what is commonly known as a ceilidh, to celebrate the life of poet Robert Burns.

The scholars were also able to sample haggis, one of the most famous Scottish delicacies.

‘As I travelled to Edinburgh on the train, the views of the snowy UK countryside were beautiful, and they really got us in the mood for a traditional Scottish experience. Burns Night started at around 7pm, with music played by the Scott Leslie Ceilidh Band setting the tone for the evening.

Scholars arrived and gathered around tables to taste haggis, the most famous local cuisine. Haggis made quite an impression on my table. Some enjoyed it without knowing what it was, while others went for the vegetarian option after discovering that the dish was made of (sheep’s heart, liver and lungs). Some decided to try it anyway, despite knowing its unorthodox recipe. I was one of them, and it didn’t disappoint. The first few bites were enough for me to understand why Robert Burns described the dish as “rich” and “worthy of a grace”.

Shortly after Mr David Bull, Head of Public Diplomacy (Foreign Commonwealth Office) and Professor James Smith, Vice Principal International (University of Edinburgh) made their welcome remarks, it was time to find out more about Scotland’s national poet. Professor Ian Campbell, of the University of Edinburgh, told us a little about Robert Burns’ life as a farmer and man of letters. He ended his lecture by reading an excerpt from a poem – a must in any Burns Night celebration.

Then it was time for the dancing, the most anticipated moment of the night. First, members of the New Scotland Dance Society invited us to hold hands in a circle and explained the basics of Scottish dance. Then, divided into groups, we had the chance to try what we had just learned. Our performances may have been underwhelming, but no one can say we didn’t have a lot of fun! Those who got tired could have a rest by the bar and buy a dram of whisky – another Burns Night tradition.

After a final dance, to which all were again invited, I left the hall with a smile in my face and excited to explore more of Scottish culture. I was not the only one. Several scholars stayed for the weekend to discover Edinburgh, which made the Burns Night experience even more memorable for us all.’