Founded in 1920 and just three hours from London by train, Swansea University is an established campus university with a long history of academic success, excellent facilities, and high standards of teaching.

When students choose to study at Swansea University, they become part of an ambitious, research-led institution, and also benefit from living in the one of the UK’s most naturally beautiful regions with two beachfront campuses.

Swansea University is currently ranked 26th in the UK by the Guardian University Guide (2023) and has been awarded gold, the highest award for teaching excellence at UK universities.

Swansea University holds the high-achieving Chevening Award holders who have studied with them over the past many years in high esteem.

‘We wish to build on this strong foundation by enabling more highly able students to contribute to our academic community.

Chevening Awards have attracted academically gifted, highly motivated students to Swansea University who have made a valuable contribution to the institution both intellectually and in terms of community diversification, and we have benefited from association with the quality and esteem of the Chevening brand. Our partnership with Chevening will help to raise Swansea University’s profile in regions which have growing significance for us and where we anticipate establishing sustainable partnerships.’

Swansea University celebrates and recognises their Chevening Scholars by hosting a number of events throughout the year, exclusively for scholarship holders. 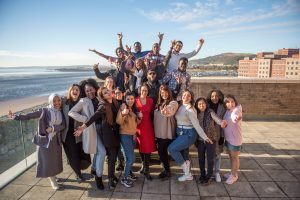 Who do Swansea support?

Swansea University welcomes applications from all Chevening-eligible countries in any subject.

All applicants who wish to be considered for an award at Swansea are encouraged to select the university as their first preference in their Chevening application.