Seven of my best Orientation moments

It’s been over a month since Orientation 2018 and no doubt you will now be familiar with Chevening’s annual welcome event having read the official news story and unofficial blog but one voice we’ve been saving is that of our scholars who were officially welcomed to the UK on 20 October 2018 at the ExCel London. In our final round-up of Orientation stories, we share seven of the best Orientation moments our scholars experienced, as told by them!

1. FROM CHELTENHAM TO LONDON 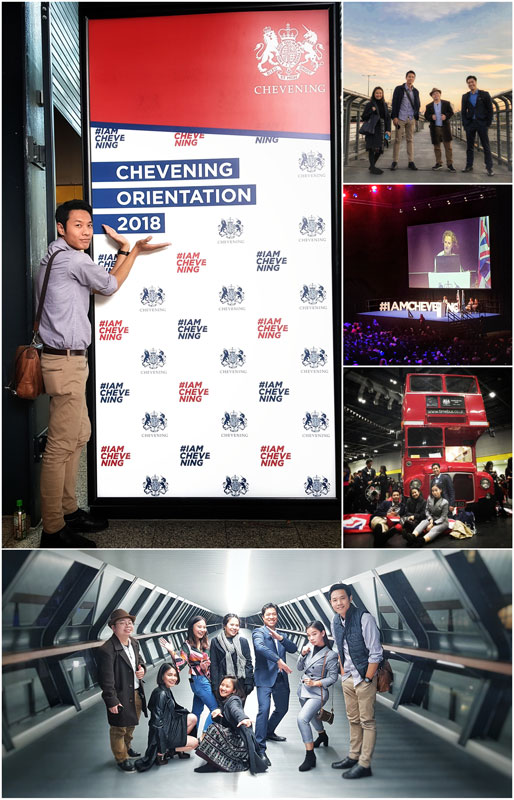 ‘Travelling from Cheltenham to London, I was so excited to get to see the scholars from my home country after we had split for a month. But, the most important thing was to get to join this phenomenal event and hang out with other international scholars, as well as to get to see their national costumes. These are the thoughts that came into my head while I was on the bus travelling to London for Orientation.

The event was so well prepared and the venue was so easy to find; it was just next to a train station! The first thing I did when I arrived was, of course, take a picture and join my fellow Lao friend-scholars. We were chatting about our lives and exchanging experiences on both academic and adaptation strategies. Overall, it was a great time seeing them again.

During the event, we were taking heaps of photos and exchanging information with other scholars. I didn’t expect to see a huge number of people in the same venue.

The highlight of this event was, to me, the very inspirational keynotes from our speakers. I was so thrilled and inspired wanting to be in a leadership role like them in the future.

I’m so appreciative to those who prepared and organised the event as it was both fun and educational, and of course, undeniably, this wouldn’t have happened without hard work from everyone at the Secretariat – a big kudos to all of them.’ 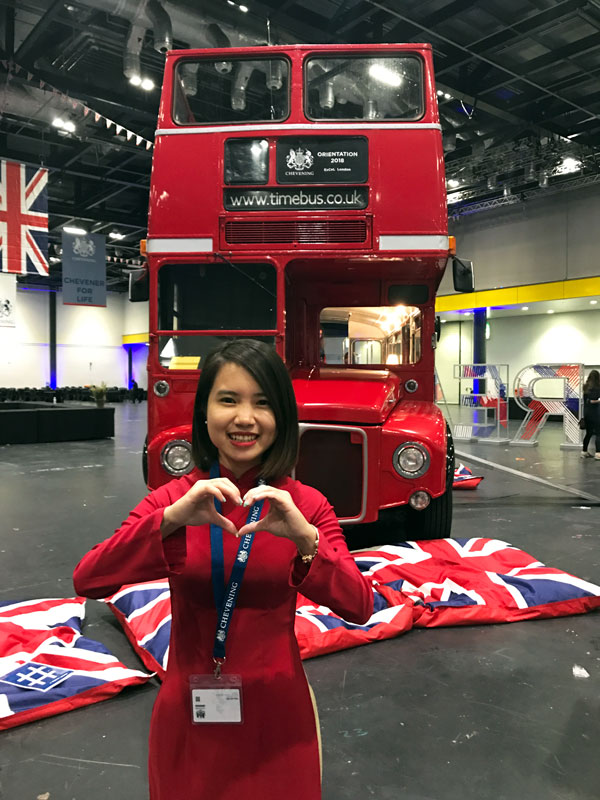 ‘My poem: #Chevener for life

“I am a Chevener for life”’ 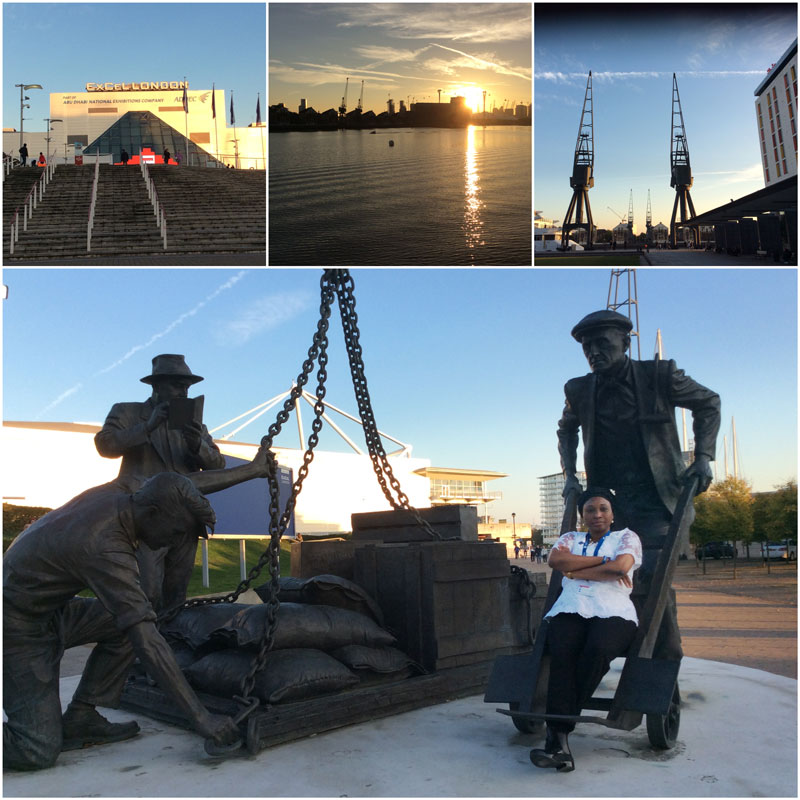 ‘Chevening is no doubt the best thing that happened to me.

It’s almost impossible to describe the euphoria, joy, and gratitude a dying man who’s got a new lease of life feels. But we can make an attempt by describing these pictures. They are reminiscent of where I am coming from and where I am going.

As the sunset is not the end, but the beginning of another beautiful day; so goes my story. Lots of sunsets, but then even more opportunities to be bigger and better.

As the sun set on the waters of the Royal Victoria Docks, I had this intense feeling of gratitude for the privilege and  opportunities that came from the decision to create a new beginning for me and the urge to fill the Chevening application form.

Just as sure as I am that the sun will rise again; I am certain much better days lie ahead with Chevening. And I am ready to take them all in. To explore them, learn from them, grow from them, build from them, and gradually walk me to fulfilling my life purpose.’ 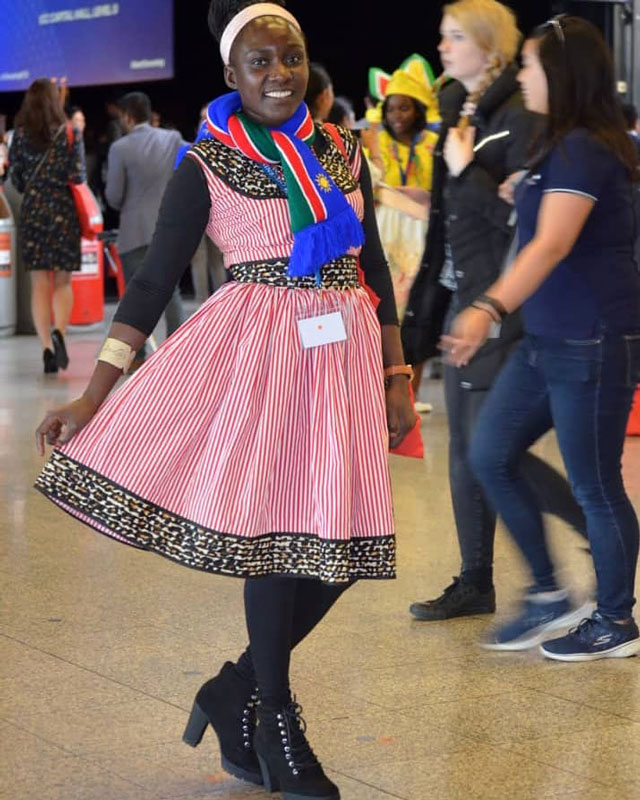 ‘Namibia was well represented by a group of 9 scholars at the Chevening Orientation on 20 October 2018.

It was a great honour and an exciting event where I got to rock my traditional dress with so much pride – just look at the smile. Happy people from all over the world united in one place; ExCel Exhibition Hall. Great memories!’ 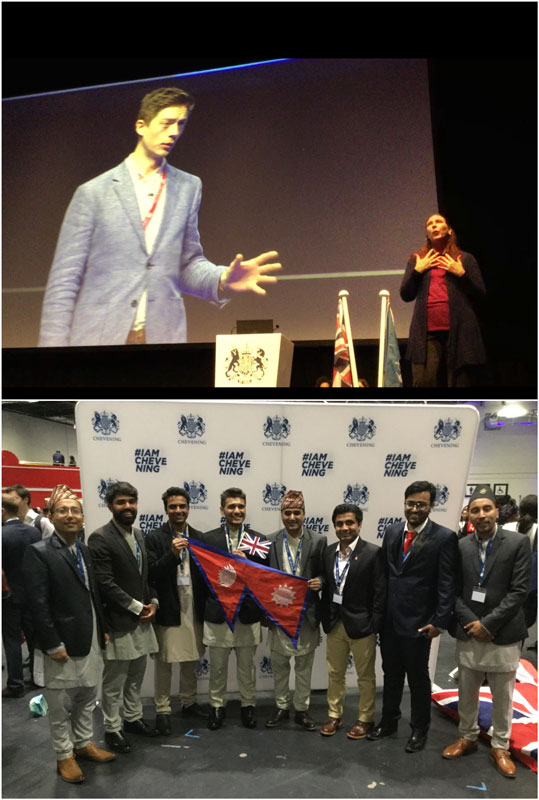 ‘I had two distinct moments during Orientation.

2. Nepali Chevening scholars are standing as brothers together committed to making a difference in our country by showing the flag through learning and experiences during our stay in the UK.’ 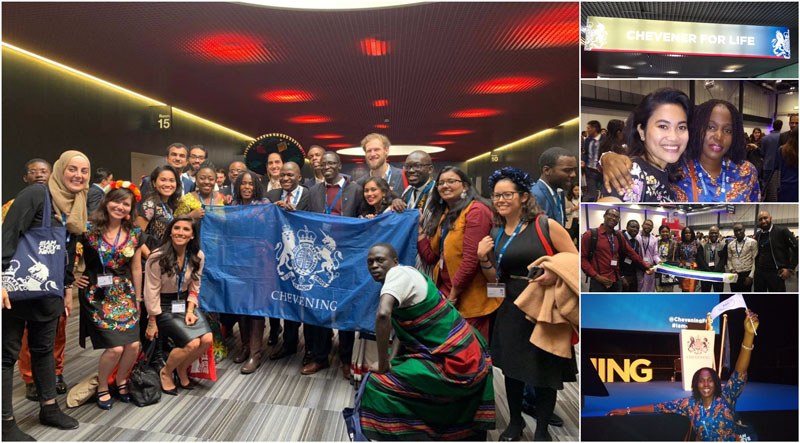 ‘As I entered the ExCel London for the never-to-be-forgotten Chevening Orientation 2018, I was greeted by the words, “Welcome to the UK, Scholar for a year, Chevener for life”! Once again I realised that this is the beginning of a new era in my life.

I was amazed by the huge number of excited scholars from all over the world, exhibiting diversity in terms of language, dress code, and culture.

I was privileged to meet other scholars from my country, coming from different parts of the UK. The feeling of nostalgia disappeared for a while as we spoke our local language.

I interacted with plenty of scholars from different backgrounds and we exchanged remarkable ideas.

One of the Indonesian scholars is my course mate and the joy we expressed on seeing each other in a “different world” still lingers in my mind. I appreciate the everlasting friendships that Chevening creates.

As scholars from my school gathered together for a photo, holding the Chevening flag, we shouted “LSHTM Cheveners”. That moment was especially ecstatic.

The speeches were inspiring, awesome, fascinating, and I was overwhelmed with joy as I sat in the auditorium listening to motivational talks that have created a positive turning point in my life.

As I waved my Chevening flag, I felt on top of the world.

Chevening Awards are indeed a dream come true and a blessing in my life.

Thanks to the British government and the FCO.’

‘Two things impressed me about this picture:
First, the view on this bridge to ExCel London is marvellous. The luxury boats, the skyscrapers, and the other similar bridges made me think about the time, the resources, and the history which fuelled this technical prowess.

Second, this is the first ever picture of me in this traditional attire. The dress is called “ntoké” it comes from the northwest region of Cameroon, one of the Anglophone regions facing a serious crisis. Although I am from the neighbouring west region, wearing this dress was a sign of solidarity for my fellow Cheveners coming from the afflicted regions.

In total, the United Kingdom through its history and technological achievements, and the attire I wore to the occasion made this picture one that has to be framed and left for posterity.

Thank you Chevening for the unforgettable moment.’ 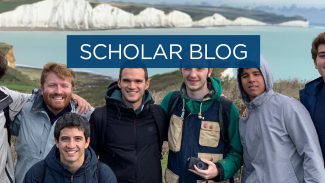 Fresher’s week; the first week of any UK university. A week before the first academic term begins where new students can network, learn more about their university, and generally, settle in. It’s a week where student unions run many events for new students including trips, information sessions, and socialising sessions. As new students, our scholars […] 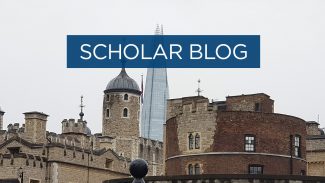 Fifteen first impressions of the UK

September and October are busy times for Chevening Scholars. It’s the time when they are packing their bags and travelling to the UK having been awarded a Chevening Scholarship to study in the UK for a one-year master’s degree. For many of our scholars, it will be the first time they have ever set foot […] 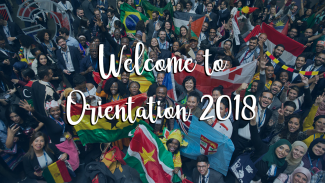 I joined the Chevening Secretariat just two months prior to our annual Farewell event. There was a lot of work to do across the entire Secretariat to ensure we said farewell to our 2017 scholars in the right way and the right way we did! Following a great Farewell, we jumped straight into planning for Orientation, which is […]