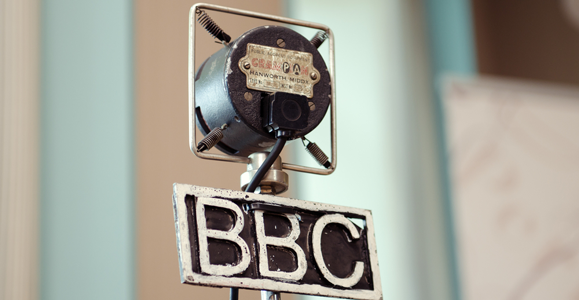 Ten Chevening Alumni have been selected to do placements in different departments of the BBC World Service, a highly respected British institution, over a period of four months.

They have been sharing their stories and experiences from their placements through our new online mini-series – #MyCheveningJourno!

Our journalists have been documenting their time working at the World Service as a way of demonstrating the fantastic opportunities that are available to Chevening Scholars and Alumni – as well as showing the reach, breadth, importance, and diversity of the work that the World Service does. More information on the placements can be found here.

We’ll be posting regularly on this page as new content comes in from our talented team of journalistic alumni, so check back again soon for more!

Here they are outside Broadcasting House in central London: 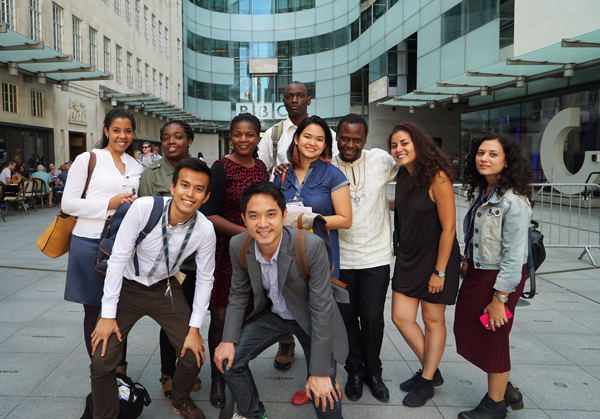 Those who remain in the UK went out for lunch, in true journalistic style, to catch up, debrief, and swap stories of their BBC placements.

We hope you enjoyed and learned a great deal from your placements, Cheveners. Good luck in your future careers in media – we look forward to seeing you online, on television, and hearing you on the news again soon! 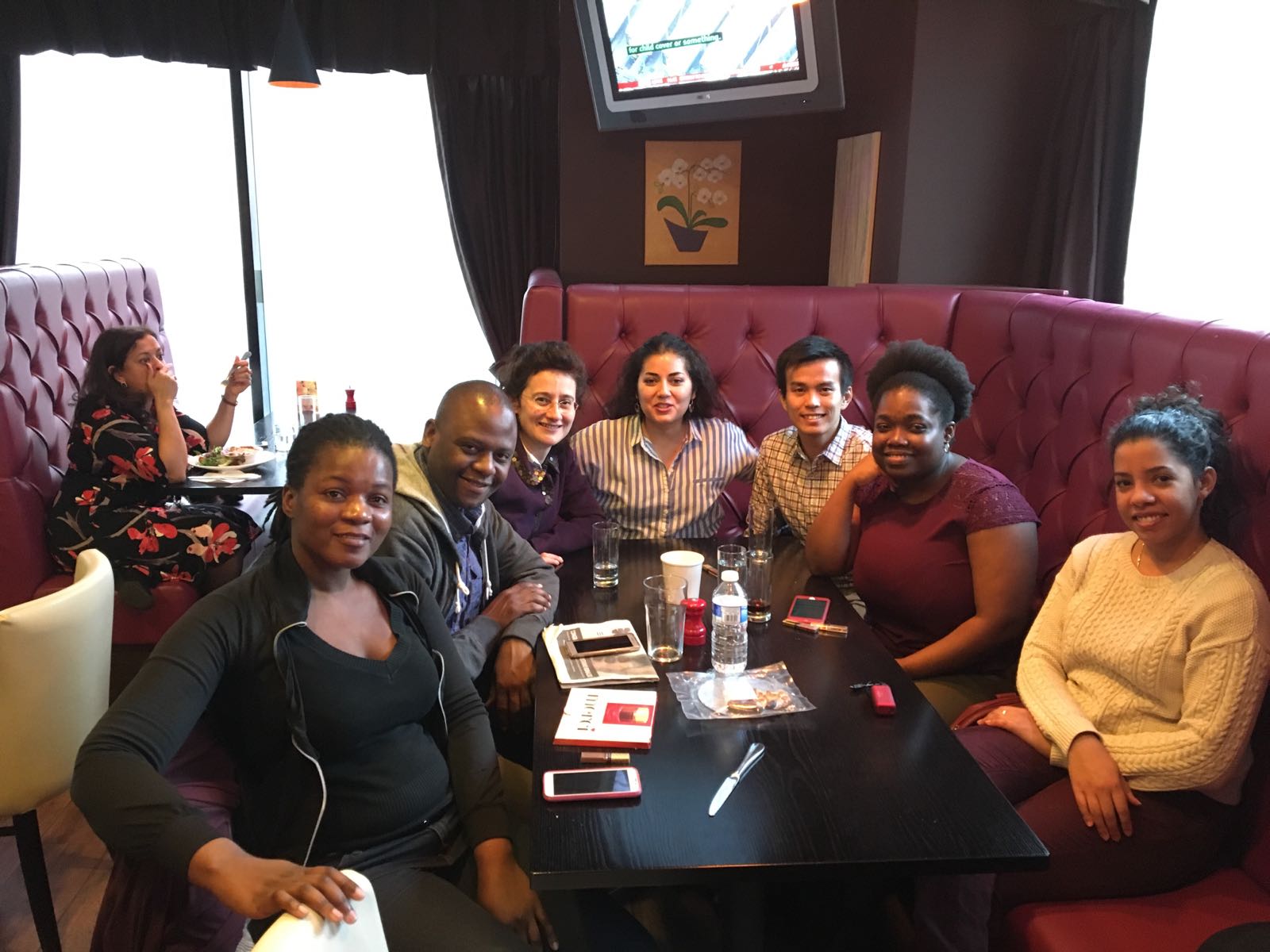 Chevening Alumna Micaela Papa from the Philippines has produced a report on remittances for BBC World Service programme World Hacks.

You can listen to ‘Respect My Remittances’ here. 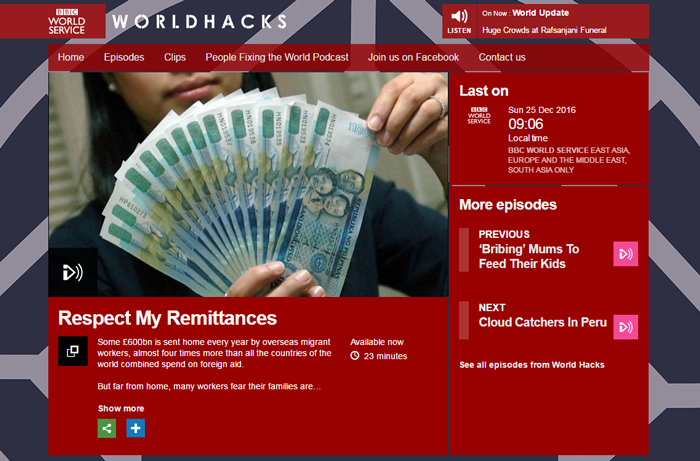 She posted her farewell on the BBC Africa Live channel. 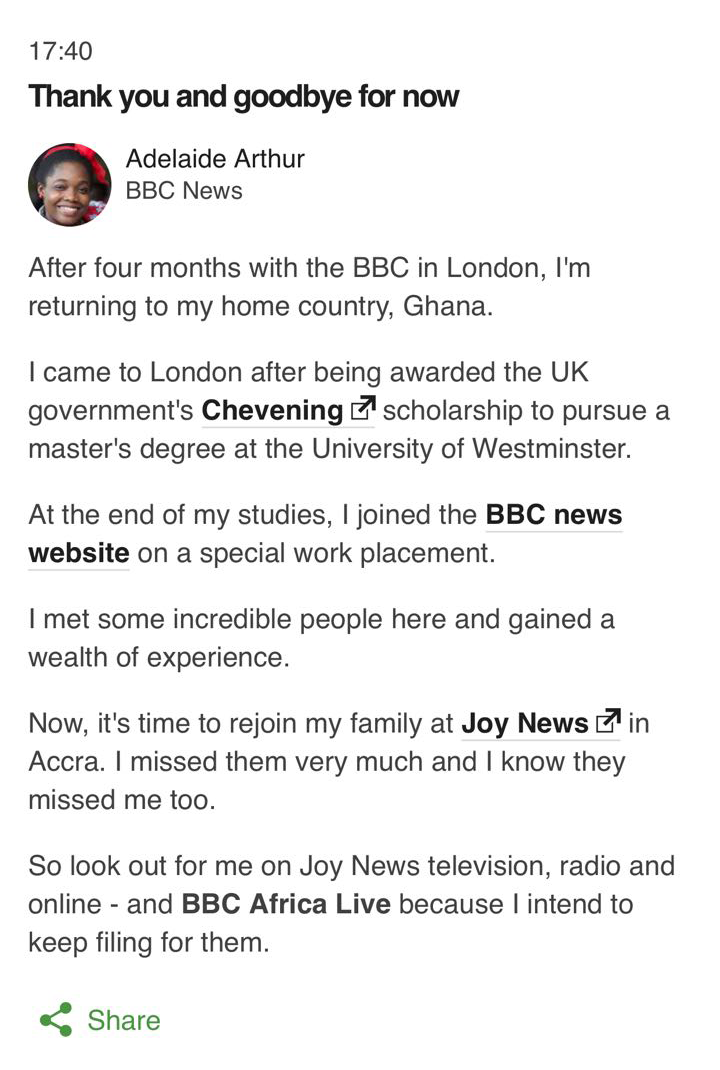 Adelaide studied Multimedia Journalism at the University of Westminster.

Before he started his Chevening journey in 2015, Joab was working as a radio presenter at the Zodiak Broadcasting Station in Malawi.

This helped him to secure a placement with the BBC World Service – Focus on Africa radio news team, which has proved a ‘steep learning curve’, even for Joab with his previous presenting experience.

In the video Joab talks us through the editing process for a radio news package, and tells us more about his BBC experience…

Joab studied Media Management MA at the University of Westminster.

News of Chevening Scholars’ placements travels far. Here’s an article from news site Malawi 24 about Joab, who in the article says: ‘Work hard and do something you are passionate about.’

Adelaide Arthur, alongside other journalists, has been running the Africa Live page. 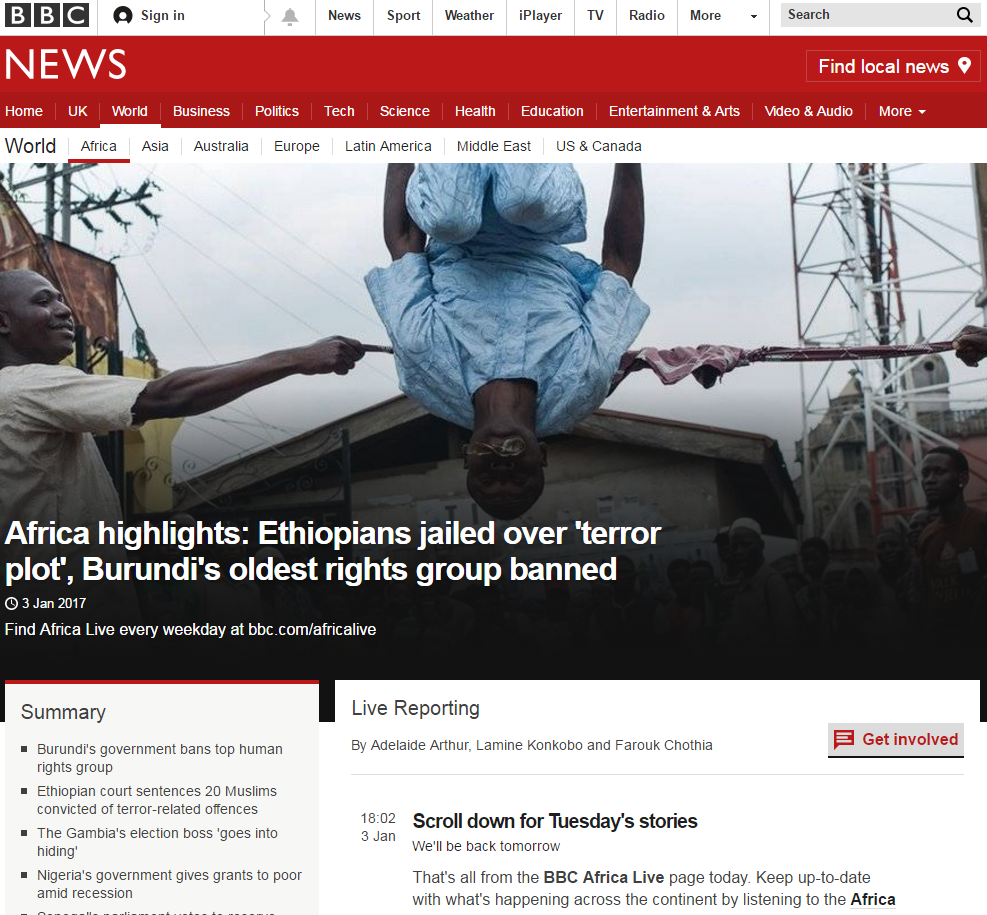 On this day in the Africa Live feed, Adelaide and her colleagues cover a myriad of topics including Burundi’s government banning their top human rights group, Nigeria’s government giving grants to the poor and the Gambian election chief who has gone into hiding.

You can read these and all the other stories covered by Adelaide and her colleagues here.

Chevening Alumna Adelaide Arthur has provided the BBC News Online department with this fascinating article on the nine traditional ways in which to name your child in Africa. 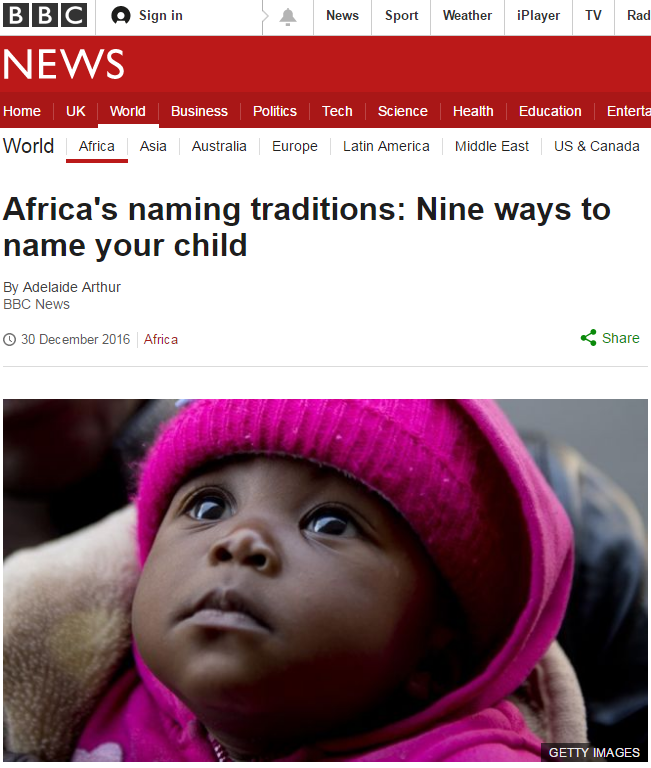 Many factors and circumstances can influence the naming chosen by parents. These include events that surround the birth, the emotional state of the child’s parents at the time of birth, celebrity culture, the order of birth, the day of the week the birth occurred on, the religious beliefs of the parents, whether the child was born in the day or night, if there were any respected ancestors in the family, and even slightly rude nicknames derived from negative physical traits of the bearer.

You can read the article and find out about the nine African naming traditions in more depth here.

Syrian Chevening Alumna Areej Zayat who’s interning at the BBC Arabic Service has written a piece on how Arab women have succeeded in Britain despite the difference in culture they face upon their arrival to the UK. 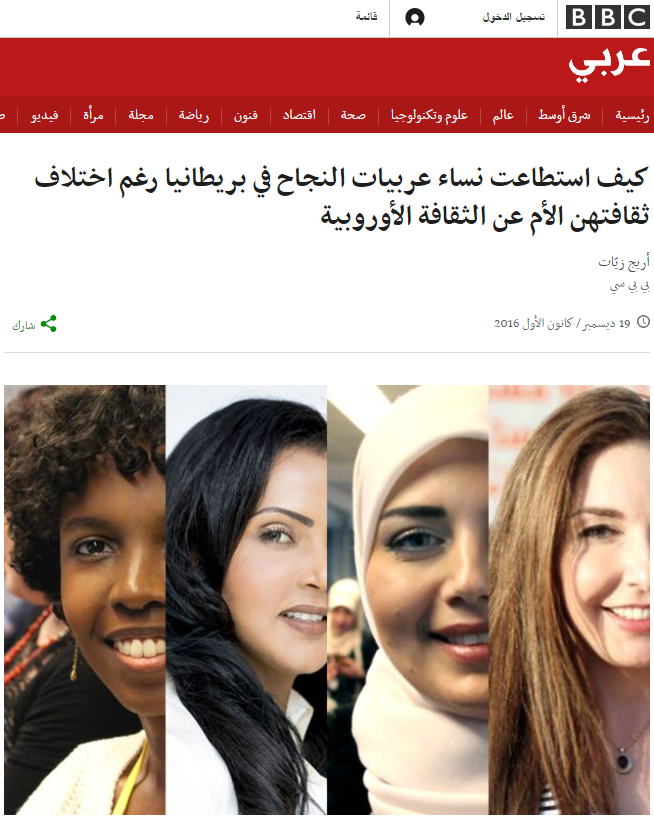 Areej’s article features four women from across the Arab world who all currently live in the UK and was written as part of the 100 Women season which aims offer an insight into the life of women in the 21st Century. The 100 Women season sees high-profile women from all industries speaking to the BBC about their work, life and ambitions.

Read her article which is in Arabic here.

It’s not all fast-paced days and deadlines for the #MyCheveningJourno scholars – sometimes there is dinner. Delicious! 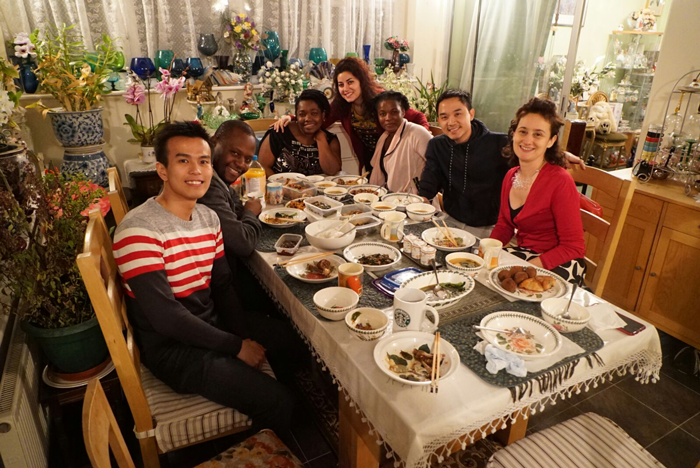 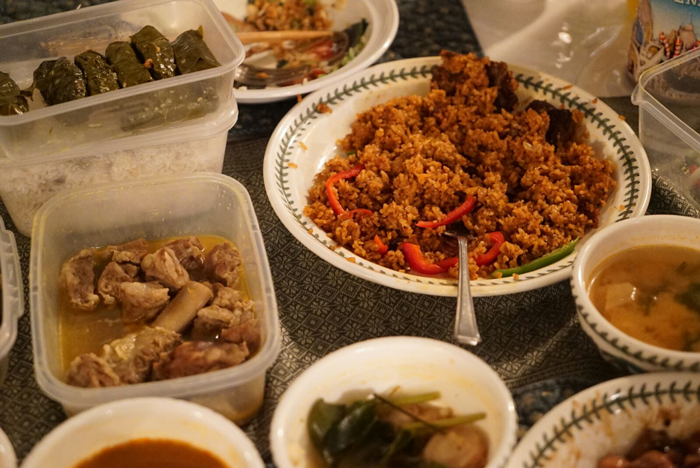 Take a look at beautiful photographs of tribes from all around the world – and practice your Spanish language skills!

Chevening Alumna Mabel Azpiri has written a piece for BBC Mundo about a new exhibition, ‘Before they pass away’, by English photographer Jimmy Nelson.

Nelson photographs the life and traditions of the last surviving tribes trying to find ways to preserve their traditions and customs in an increasingly globalised world.

Check out the article here. 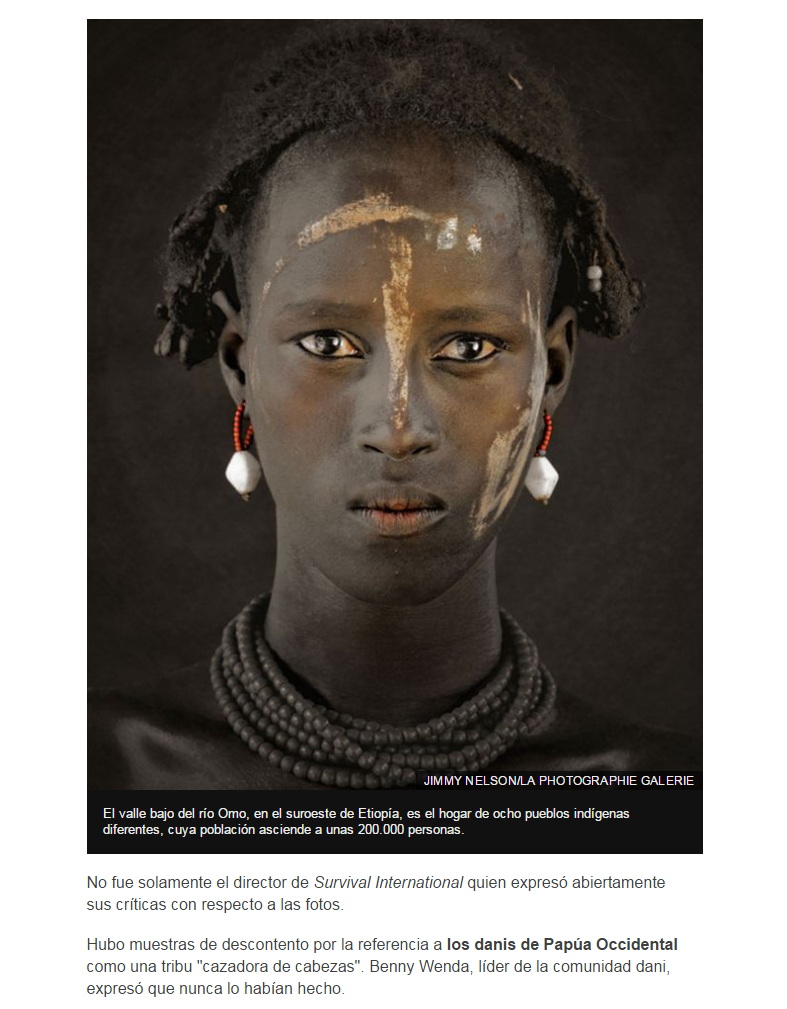 If you’re doing research on the internet, only around 17% of notable profiles you’ll find on Wikipedia are of women – that’s according to a campaign run by BBC 100 Women.

As part of her placement Chipiliro got involved in the BBC’s campaign to change this statistic – a 12 hour Wikipedia edit-a-thon to highlight the work of women around the world on 8 December.

The London edit-a-thon was one of 15 events happening in 13 countries around the world.

Chipiliro described why she was excited to be part of the campaign to Chevening Alumna Areej Zayat, who was there to ask the questions! Watch below:

Later on in the day Chipilro also appeared on BBC World News – Focus on Africa to talk about the campaign. 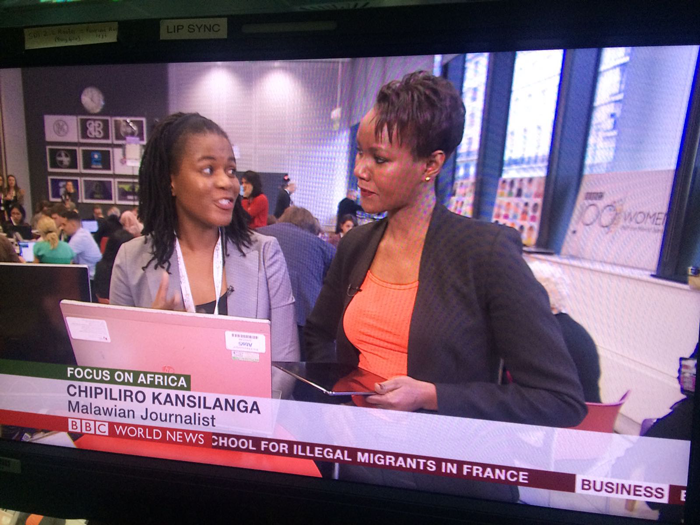 We’re happy to report Cheveners working together across the BBC World Service as Joab and Chipiliro cover the debate on a pending bill in Malawi that would legalise abortion, a bill which is creating debate about women’s rights in the country.

The BBC World Service is providing updates on the progression of the bill, with Cheveners playing a key role in reporting developments.

Chipiliro has written this story covering a protest march in Malawi, while Joab has put together a similar story for BBC World Service – Focus on Africa.

The story is published on this page.

US and Ghanaian authorities have shut down a fake embassy that had been selling real US visas.

Chevening Alumna Adelaide Arthur co-wrote this feature on the story for BBC Africa along with other journalists. 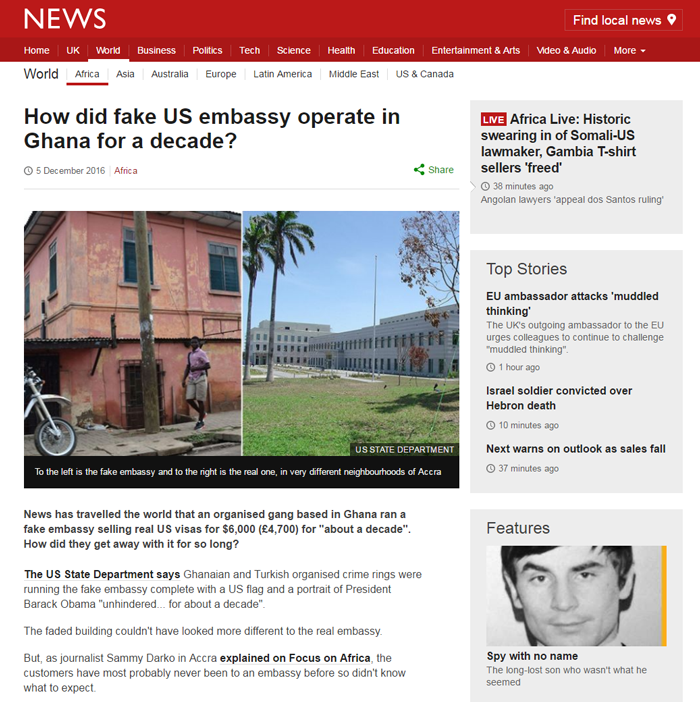 Mexican sea turtles’ eggs are are being stolen by thieves in the south of the country – this story was brought to BBC Arabic viewers’ attention by Syrian Chevening Alumna Areej Zayat.

Look out for the thieves in the story – they’re the ones riding the donkeys down the beach.

Areej pitched the story, edited the footage, and wrote and voiced the script – here it is on the BBC Arabic channel.

Chevening Alumna Micaela Papa from the Philippines has gained some fantastic experience since starting in the documentaries and radio current affairs department at the BBC World Service.

Micaela studied MA Documentary by Practice at Royal Holloway and the first project she worked on at the BBC was producing a profile of the new President of the Philippines, Rodrigo Duterte. You can listen to it here.

She also presented an episode of World Hacks, a new programme on the BBC World Service. You can listen to that episode, Cloud Catchers in Peru, here. 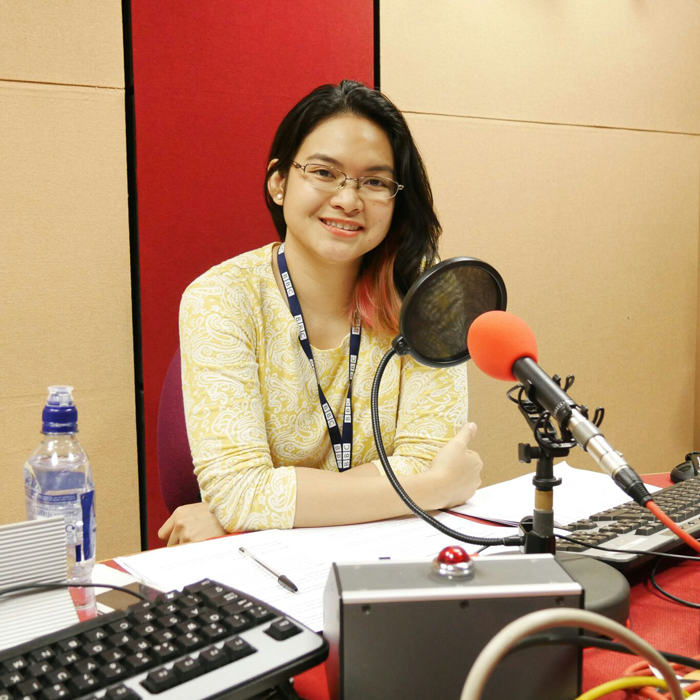 Chevening Alumna Adelaide Arthur (Ghana) is enjoying her placement at BBC News Online – she’s learning a lot from the experienced journalists who work there!

Adelaide sent us a quick vlog from the heart of the world newsroom in New Broadcasting House, London. She’s speaking softly so as not to disturb the productive quiet of one of the world’s most influential newsrooms!

Clearly demonstrating the skills and knowledge that she acquired whilst studying Multimedia Journalism at the University of Westminster, Adelaide’s article looks at what Pidgin is, what is so special about it, the number of Pidgin speakers, and its origins. 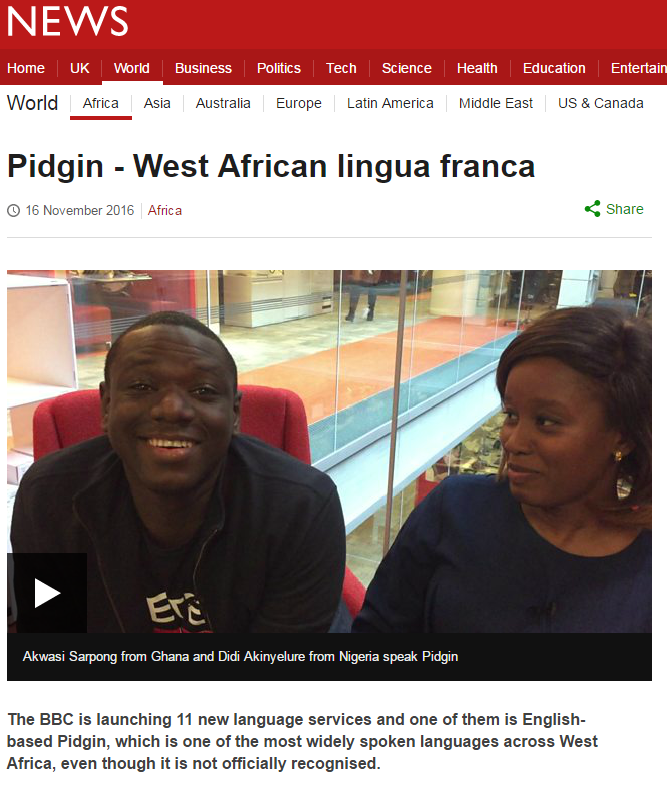 National elections are always a long and busy day for journalists.

Chevening Alumna Areej Zayat from Syria got the chance to experience the excitement of covering the US presidential elections live from the BBC Arabic newsroom as part of her placement through Chevening. She produced this video diary to describe a busy day at the BBC.

Mabel has put together an article highlighting the work of Paula Zuccotti including her most recent project that depicted the life of Hillary Clinton and Donald Trump. The British-based Argentinian artist aimed to use everyday objects that represented the ideas of both politicians and other prominent figures.

Mabel, a Chevening Alumna from Cuba, studied for an MA in International and Online Journalism at the University of Salford. She is now spending her four-month placement at BBC Mundo, the World Services’ Latin American Spanish service. 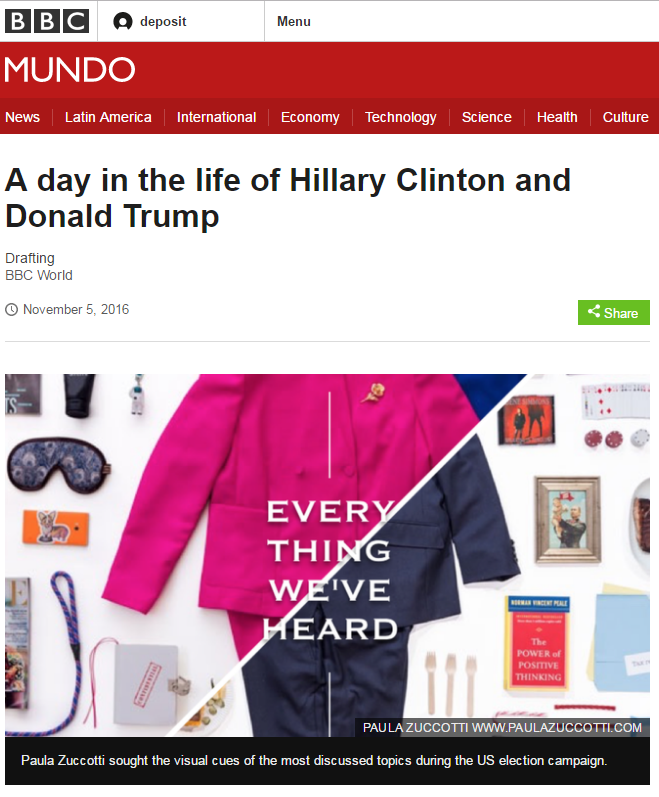 Mabel has also written a piece on Pepe El Sapo and how the amphibious meme has become a hate symbol in America. 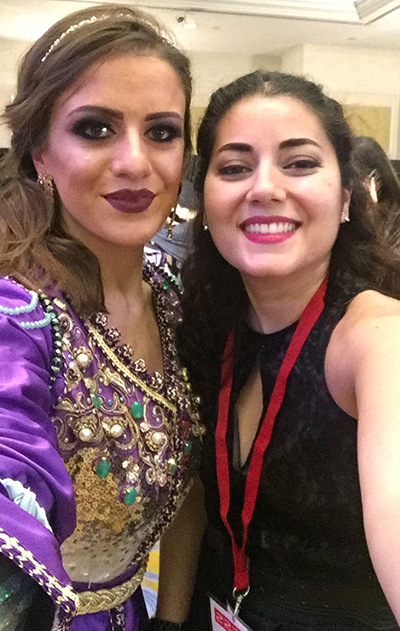 Areej briefly talks about her experience filming a Facebook Live broadcast for the first time!

You can watch the broadcast filmed by Areej which is in Arabic here. 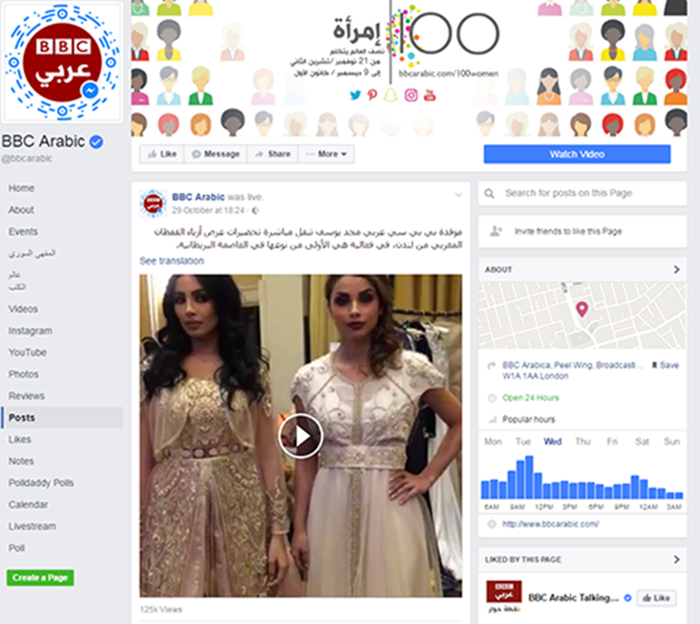 Rana has put together this moving story for BBC News on a Libyan university campus, closed for more than two years because of intense fighting, opening its doors for a series of graduation ceremonies.

Students have been photographed celebrating their academic achievement in front of the battered buildings of a university that was shut down mid-way through 2014.

Rana is at BBC Monitoring, a service which gathers news, information and comment from the mass media around the world for subscribers.

Rana studied Media and the Middle East at SOAS. 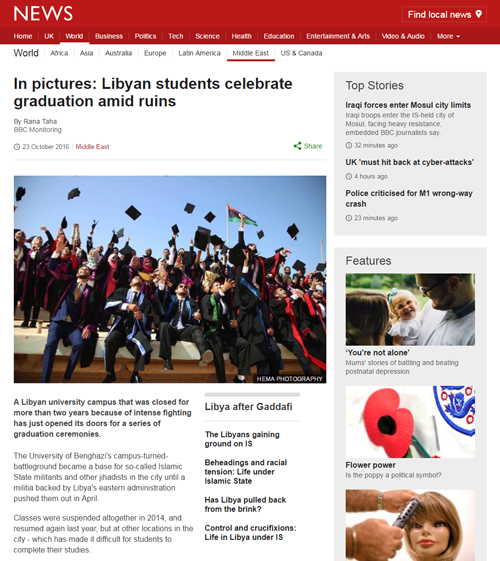 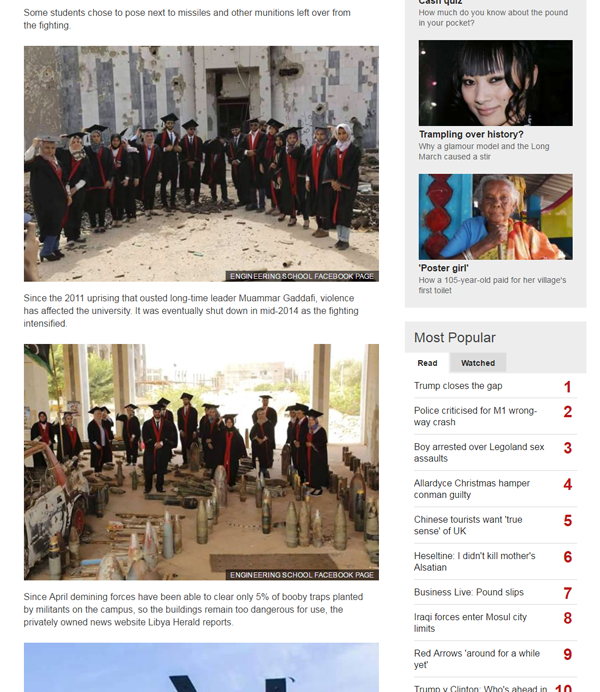 As part of that, Chipi is spending some time at Africa Live, which keeps online users up-to-date with the key stories happening across the continent every day. 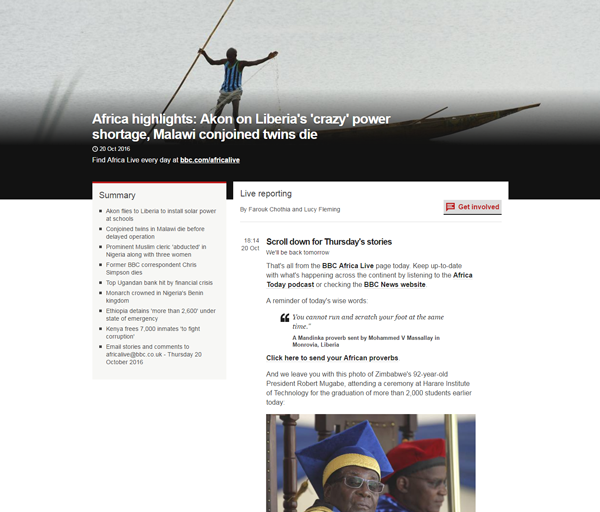 Chevening Alumnus Joab Frank Chakhaza, from Malawi, is on placement at Focus on Africa Radio at the end of a year spent studying Media Management at the University of Westminster.

Excitingly, Joab got the chance to attend the third and final US presidential debate, which was held at the University of Nevada, Las Vegas. BBC Focus on Africa called him for an interview and you can listen to his recording below:

Chevening Alumna Adelaide Arthur, from Ghana, studied Multimedia Journalism at the University of Westminster. She’s been using her skills and knowledge at the fast-paced BBC News Online department.

Adelaide worked with Joab Frank Chakhaza, Chevening Alumnus from Malawi, on this story. Joab is working at Focus on Africa Radio and it’s brilliant to see Cheveners working together across departments at the BBC! 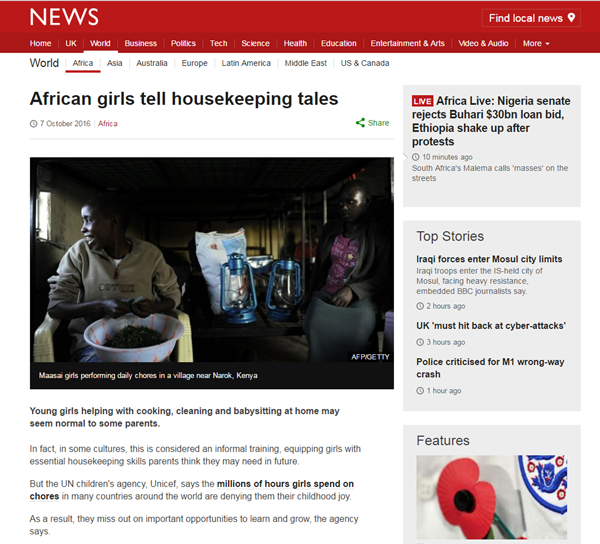 A placement at BBC News Online means that you’re likely to be working on a wide range of stories on different topics, across countries! Here’s another story from Adelaide:

Chevening Alumna Areej Zayat from Syria has been interning at the BBC Arabic Service, helping to evaluate films for the BBC Arabic Festival 2017. Areej caught up with the Festival Director, Sheyma Buali, and recorded an interview for Chevening.

Areej studied an MA in Television Journalism at Goldsmiths College in 2015/2016 and has clearly been making good use of her skills!

Areej has also been working with the BBC Arabic Service Talking Point team. Here’s a photo of the team and audience after recording a recent programme… 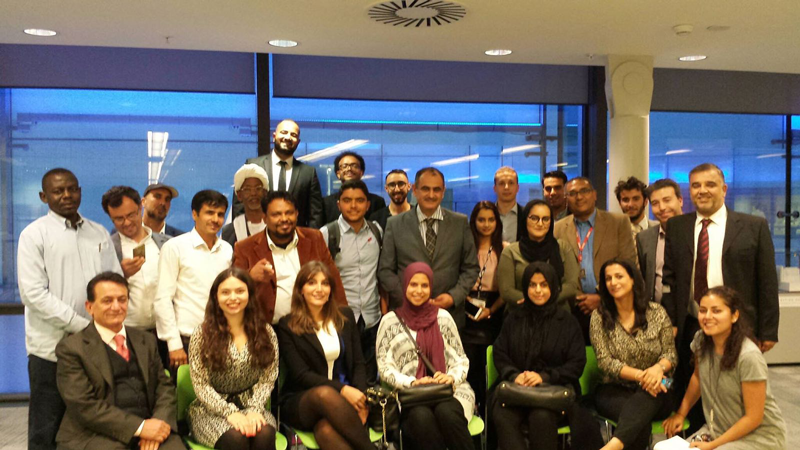 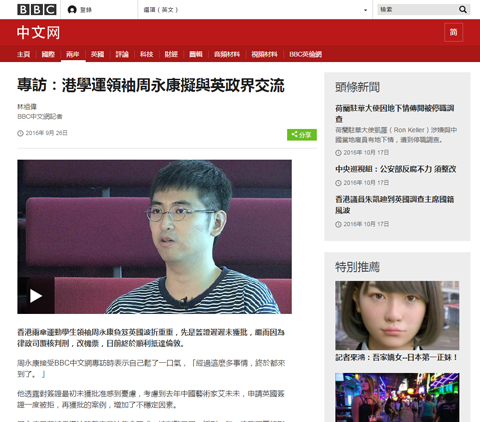 Noppatjak Attanon, Chevening Alumnus from Thailand, studied International Journalism at City University. He’s been writing up, filming and editing a range of different stories while interning at the Thai Service, including this story on Songkran festival in London – or Thai New Year!

Songkran is a special and exciting occasion, marked by throwing or sprinkling of water over others. 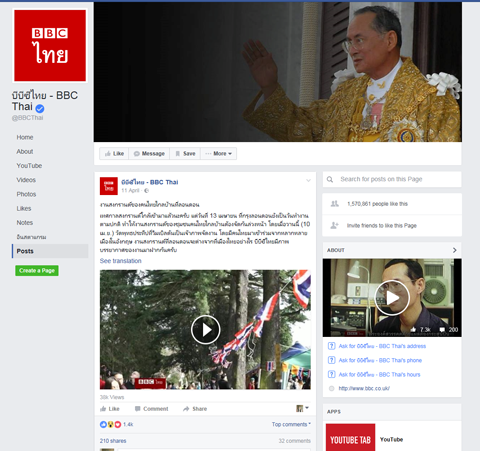 Here are some more stories that Noppatjak has been working on: