How the internet changed the world 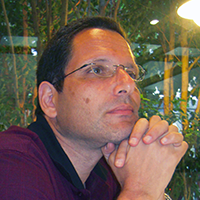 If you had the power to rid the world of the internet, would you do it?

My assumption, given that you are reading this blog post, is that you are part of the 51.7% of the world that uses the internet. Therefore, I assume that you are aware of its great benefits, as well as the ways in which the internet has been abused for criminal, violent, and anti-social purposes.

So, what do you think?

My choice is not to go back to a pre-internet time. The internet is an integral part of my life. I  use it on a daily basis. I cannot imagine my life without it.

Comparing the world before and after the internet

Just compare the life of my doctoral students to my life as a DPhil student at Oxford during the late 1980s. I have said time and again that Oxford reached fame and status despite its libraries, not because of them. As an interdisciplinary scholar, I used seven of the Oxford libraries regularly, moving constantly around Oxford on my loyal bike, rain or (seldom) shine. In the library I had to find resources with the help of a huge paper catalogue, had to fill a little note (I called it ‘tzetale’) requesting books and journals only to realise they were only available in another library. This set me off on my bike again, and when I finally arrived at the right place, I had to wait for the book to come my way. Most libraries (with the exception of the wonderful Social Sciences Library on George Street) were in-house only, meaning you could not take books out. If my request was handed in at around 11:00am, I knew that I would receive the book, if lucky, at around 2:00pm. No librarian would forego their lunch break for me. I spent hours searching for information, waiting for information, riding on my rapidly ageing bike to obtain information.

Today, students have possibly more information than they can handle right at the tip of their fingers. They can remain in the comfort of their home, inside a warm bed, searching for and obtaining information in a matter of minutes. What a life! What a luxury! I certainly know how to appreciate this marvellous innovation.

Not many people in the late 1980s would have guessed that a little phone would become the centre of their world and the focus of their attention. With a small powerful computer the size of their palm (or heart) people can: shop, order plane tickets, read, listen to music, watch the news, send (e)mails, play games, visit libraries, study languages, write articles, socialise, use Chevening Connect, date, and fall in love (to list a few). And technological advancement does not stop. All we need is to imagine, and someone will translate imagination to reality.

In 1995, when I bought my first laptop, it was so expensive and heavy that it defeated its purpose: I was reluctant to take it out of my home. I treated it like a diamond because it was that expensive. Now, laptops are affordable and light. They are cheaper, more powerful, faster, and more functional than my 1995 diamond-like $3,500 laptop. In 1997, when I returned to Oxford as a Chevening Scholar, there were more than one million websites. Most of them were functioning (Halleluiah!) but a new problem had risen: finding the right information was difficult. You searched for lions and received cats. This issue was resolved with the arrival of Google. (I heard about Google for the first time in 1999, when I was a Fulbright professor at UCLA). In 2007, when I arrived at the University of Hull, wi-fi was available only in a few places on campus. Now cities pride themselves for having a municipal wi-fi.

In the 1990s, one of my friends got married after meeting his future wife online. Their love story sounded at that time like a Hollywood movie. Ohawoo! Meeting online. How cool is this? Astonishing. No more. Now a substantive number of couples meet online. The meaning of friendship has also been altered by the internet. Many are proud to have more than one thousand friends on social-networking sites (between you and me: I would rather have one real true friend than 5,000 virtual friends). Often, online relationships are far less meaningful and demanding than friendships offline. People invest less in such friendships, and expect less. But, as previously mentioned, people can fall in love and form very meaningful relationships online if they choose.

Finding information is becoming easier as accessibility grows. Open access publications are en vogue. The idea behind open access is a noble one. Scholars and students in Europe and North America are fortunate to be part of the prosperous Western world. I am fortunate to live and work in a scholarly country. However, not all world scholars are as fortunate as I am. The situation is difficult in many African, Asian, and South American countries. They do not have state-of-the-art libraries like the one at the University of Hull. Sometimes they have no library at all. Open access utilises this age of globalisation and internet to connect between the privileged and the less privileged. A wealth of information that is otherwise denied to some parts of the world becomes available. Scholars and other interested people in developing countries are able to access valuable information without paying prohibitive subscription fees or violating copyrights laws. Open access helps to increase knowledge and decrease inequality; it enriches cultures and broadens the community of knowledgeable scholars. Open access is a tool of empowerment and communication, creating bridges and bringing scholars together.

Technology is neutral; it can be used and abused. The internet’s design and raison d’être are complete freedom. However, this allows people to exploit the net’s massive potential to enhance partisan interests, and promote harmful content. Given that the internet has been part of our lives for a relatively short time, discussions about the costs and harms of the internet, and how to address them, are in their infancy. The transnational nature of the World Wide Web makes regulation very difficult, but still possible.

We need to strike a balance between two important principles: freedom of expression and social responsibility. Slowly, we are developing the necessary tools to enjoy innovation and freedom whilst adopting safeguards and rules of responsible conduct. In my book Confronting the Internet’s Dark Side (you can read it on your phone) I make a distinction between Netusers and Netcitizens. The term ‘Netuser’ refers to people who use the internet. It is a neutral term which does not suggest how people use the internet. On the other hand, the term ‘Netcitizen’ is not neutral. It describes a responsible user of the internet. Netcitizens are people who hold themselves accountable for the consequences of their internet use. They are good citizens of the internet, contributing to its growth whilst making an effort to ensure that their communications and net use are constructive. They foster free speech, open access, and a social culture of respecting others. Netcitizens are Netusers with a sense of responsibility.

The mix of open standards, diverse networks, and the growing ubiquity of digital devices makes the internet a revolutionary force that undermines traditional media such as newspapers, broadcasting, and telephone systems, and that challenges existing regulatory institutions based on national boundaries. But the picture is not all roses. The internet’s massive potential can also be abused, and we must be aware of the potential for inflicting harm and devise ways to tackle the challenges.

We can assume that more people will have access to the Internet whenever and wherever they are. Phones will become more sophisticated; advanced voice recognition capabilities will make both the keyboard and the mouse obsolete; technology will develop to enhance connectivity between media and our senses, engaging our senses more fully with tinier and more powerful speakers deep inside human ears; chips might be installed into our bodies to receive and transmit data and various communications; 3-D innovations will enable our bodies to feel sensations and to taste edible products we see on our portable screens. These wonderful innovations should be accompanied by an awareness of the consequences of these developments on individuals and society at large.

While a great deal is dependent on how we use the internet, a great deal is also dependent on the internet gatekeepers. It has been said that the CEOs of Facebook and Google have more power than presidents and prime ministers. This statement is not exaggerated. The leaders of Bolivia, Chad, and Laos (to name a few) would love to have Zuckerberg’s power. But power without responsibility is dangerous. Power without responsibility is corrosive. Power without responsibility undermines our well-being. Therefore, we must insist that internet intermediaries take responsibility and ensure that Netusers can enjoy the vast capabilities of the Internet without putting themselves in danger. The internet should be enlightening, innovative, entertaining, productive, voicing the best of humanity. To enable this, boundaries should be introduced, antisocial and violent activities should be curbed, and safe environments should be established. This requires a combined effort of Netusers, business, governments, and the international community at large. 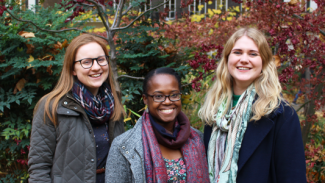 60 seconds with the alumni team

Two new staff recently joined our alumni team at the Secretariat, expanding the team to three to reflect a growing network of former scholars and fellows. Tell us a bit about what the alumni team does. The alumni team features Aba Quartey (Alumni Relations Manager), Jo Lloyd (Alumni Officer), and Billie Downer (Alumni Assistant). We […] 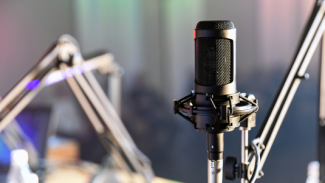 Ten Chevening Alumni have been selected to do placements in different departments of the BBC World Service, a highly respected British institution, over a period of three months. We are sharing their stories, thoughts, and videos from their time at the World Service through our rolling #MyCheveningJourno blog. We’ll be posting regularly on this page as new content comes […] 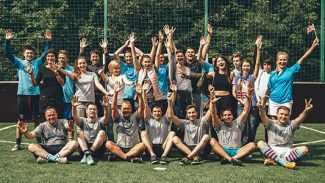 Conferences, workshops, and even a football game—this is the current events schedule of the Chevening-Russia Alumni Association. After a period of slow activity, Russian Chevening Fellows have opened a new page in the Association’s history. Indeed a significant role, in that British Embassy Moscow has found an efficient balance of support, partnership, and freedom in their cooperation […]