December. A month that can be defined by a variety of holiday celebrations across the world including Christmas, Hanukkah (month dependent), Yule, Yalda, and of course, New Year’s Eve. For Cheveners, it is also a break from university between terms which means, ample time to explore the UK, create new traditions, and form new friendships before exams and deadlines creep up.

We asked our class of 2019 to tell us about the wonderful ways they celebrated the holiday season here in the UK and they have not disappointed. 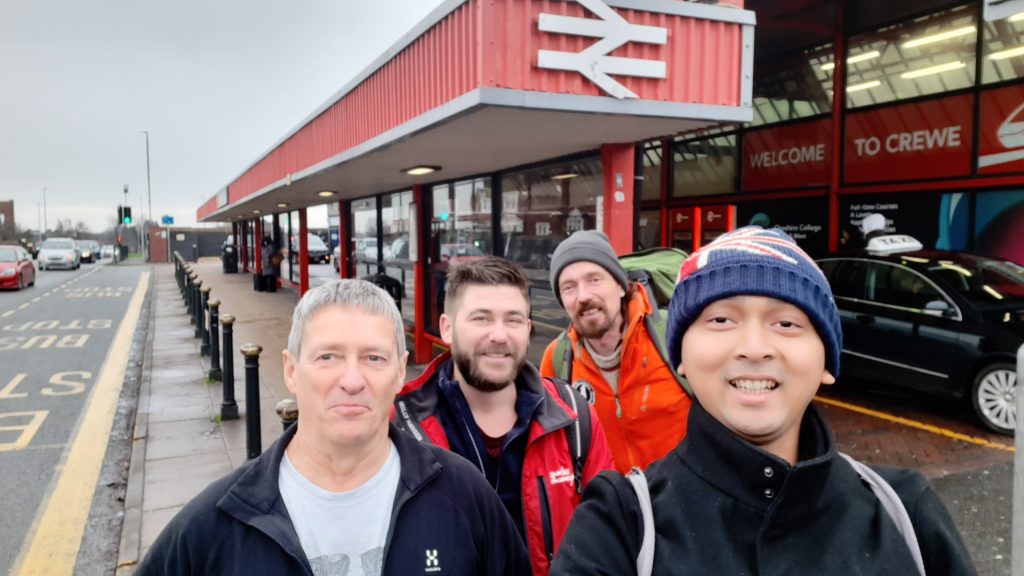 ‘I have several stories from the holiday season, but this is the main one which I’ve called: helped-by-strangers with a free ride to Crewe.

It all happened when I had to catch a train from Crewe to Chester on 27 December. My local train to Crewe from Holmes Chapel was cancelled, as a local train franchise company cancelled all trips on that day due to a lack of staff – a typical holiday travel disruption apparently. In Holmes Chapel, a beautiful countryside area in Cheshire, I had been hosted by and reconnected with my high-school friend currently living in the UK with her warm home there.

Waiting for a rail replacement bus service at the station, I met two other guys. One, a Welshman named Tim Mottishaw; an Antarctica Husky Trainer who was on his leave days and planned to visit Snowdonia National Park in Wales. The other was Ashley Lacy; a camping company manager in Bangor. We’d never met before but we all realised that we shared the same train route so Ashley called his relative, Alan. Alan drove to us and offered all of us a free lift to Crewe to catch our shared train to our final destinations.

In the picture, we are at the Crewe railway station, eternalising the moment with a we-fie!

During the ride, I told them about moving here to the UK and studying with a Chevening Scholarship.

I will never forget the warmth of British people who are keen to help strangers.’

2. AT HOME WITH LYNN AND ROLAND 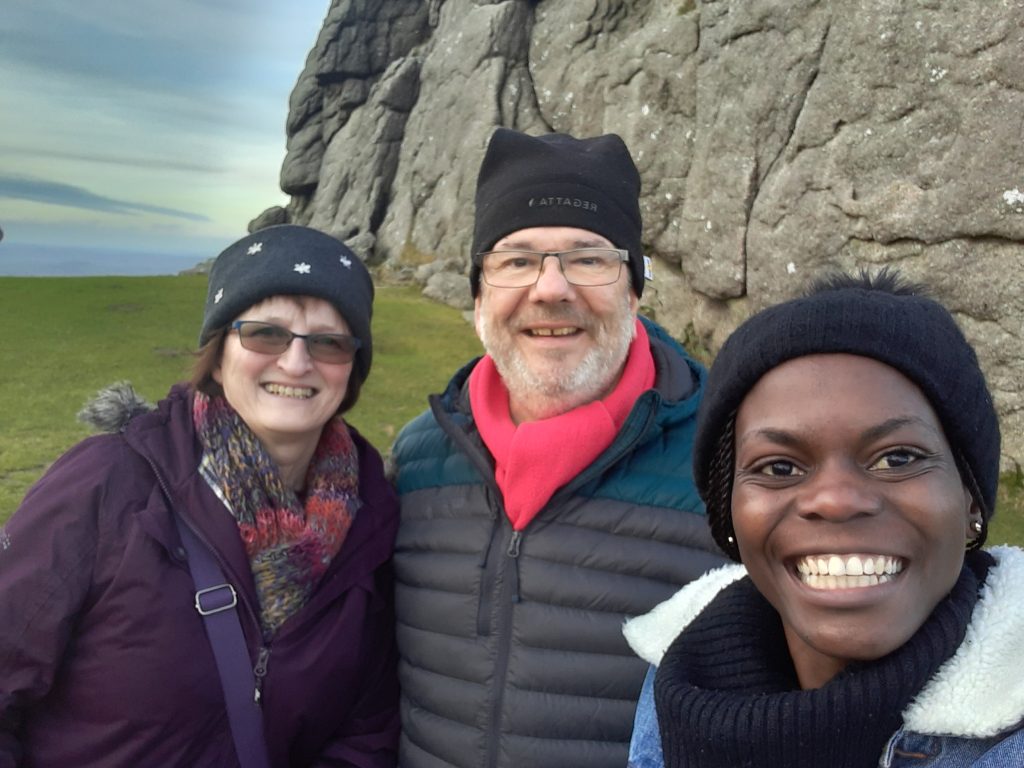 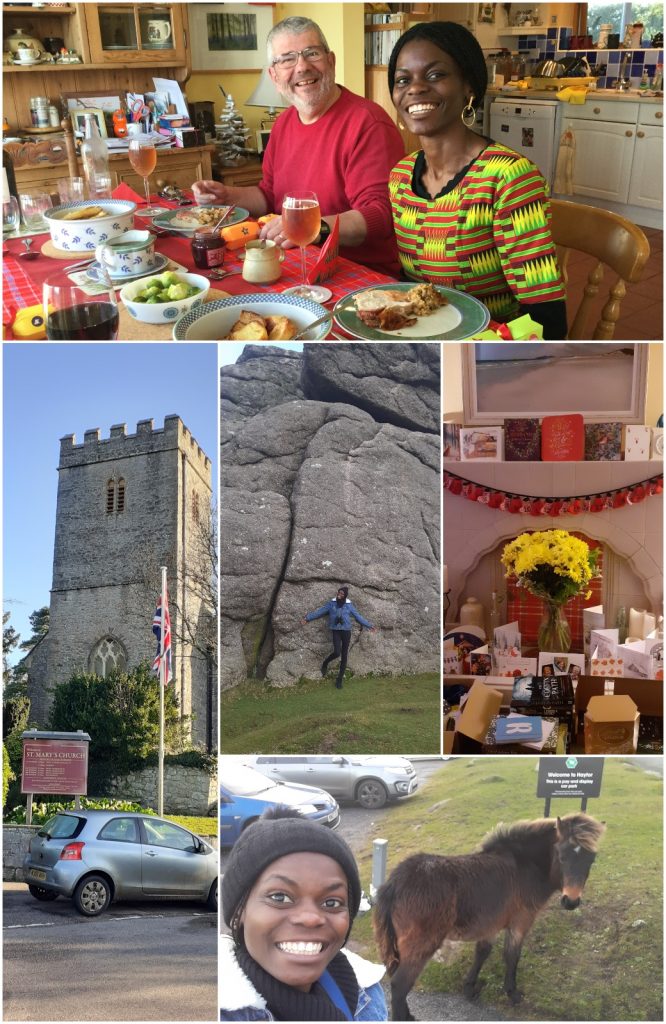 ‘Spending 4 days in Devon with my hosts Lynn and Roland was certainly an awesome Christmas.

I travelled 2 hours 30 minutes by train to Newton Abbot across the picture-perfect views of white sheep on flourishing green hills, to the view of the sea on the English Channel.
Lynn and Roland, met with me at the train station. We had a great time in their home talking and sharing various cultural experiences, and then preparing stuffing for the Christmas turkey. We ended up going to bed close to midnight.

On Christmas morning, we attended a pleasant service at St Mary’s Church, in a building that has stood since the 14th century. That’s over 600 years.

Later, Christmas dinner included British traditional turkey, and for dessert we had a trifle, and Christmas pudding. We then took a drive to Dartmoor National Park, where we had a short walk seeing ponies around the rocks. I did not attempt to do any rock climbing – how dare I on Christmas! We were able to get home in time for the Queen’s annual Christmas message (I learnt that this was part of British Christmas tradition also).

I felt at home in Lynn and Roland’s home. This was a perfect way to spend Christmas away from home in Malawi, and relax for all the term’s readings and long essays. But eventually, at the end of my visit, as I got back on the train for Reading Station at 14:30, I remembered that my assignments were waiting for me.’

3. MAKING UP FOR CHRISTMAS PAST 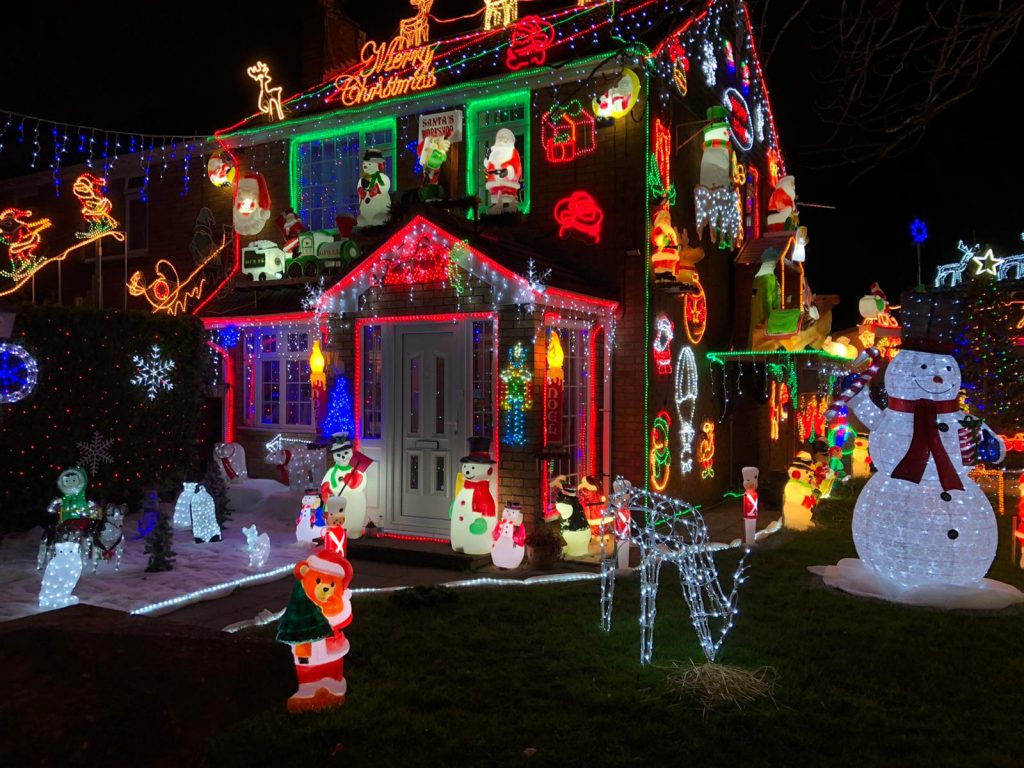 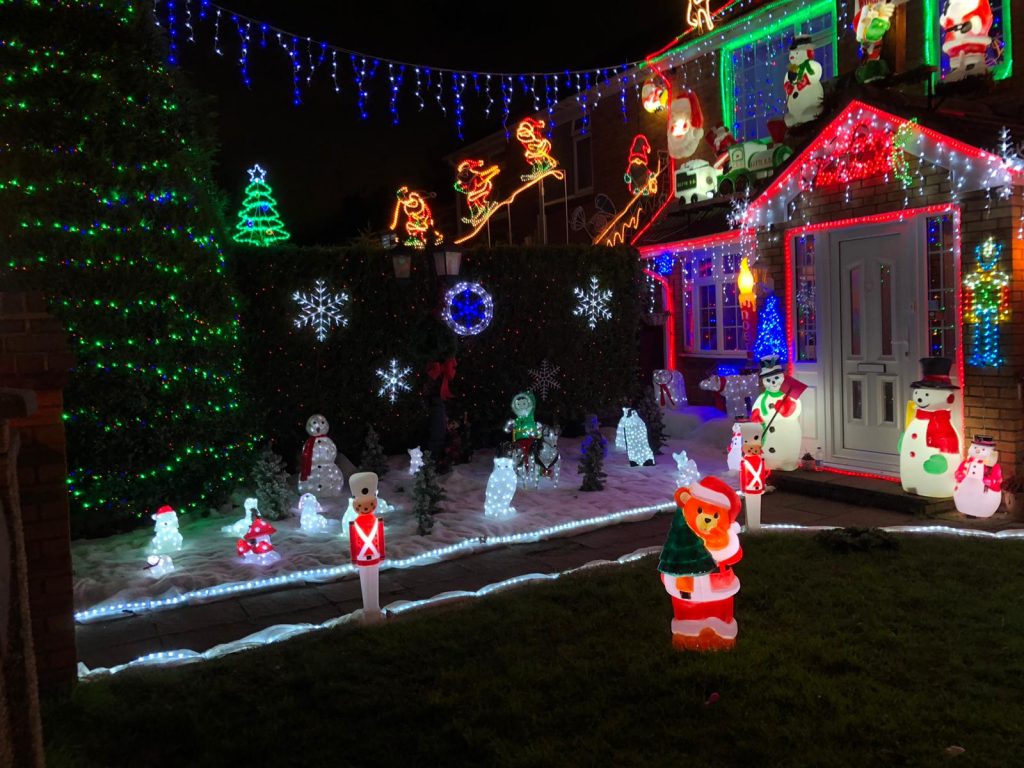 I have in the past held a strong belief (without voicing it), that Christmas is for children. I consequently treated Christmas with contempt and resisted various attempts to participate in Christmas activities, except to save face.

That was until I came across the stylish, well-orchestrated, conglomerate dance of lights in unison to the stunningly choreographed background music that characterises Christmas in the UK. It is an elaborate exhibition of beauty and creativity that surpassed my imagination. In fact, to say that some houses look like they were architecturally conceived and constructed with Christmas lights and decor in mind could be an understatement. It is simply magnificent!

And so, slowly but surely, I got infatuated and ultimately fell deeply in love with this British Christmas tradition! I therefore decided to honour and make it up to Christmas, for the times that I failed to do so in my actions, thoughts, and in words. So, every time I came across any outstanding piece of Christmas décor, I bowed in my heart in honour and blessed the authors of such radiance. That’s how I celebrated Christmas!

And since change is the only constant, I hereby swear that I will henceforth, celebrate and honour Christmas!’ 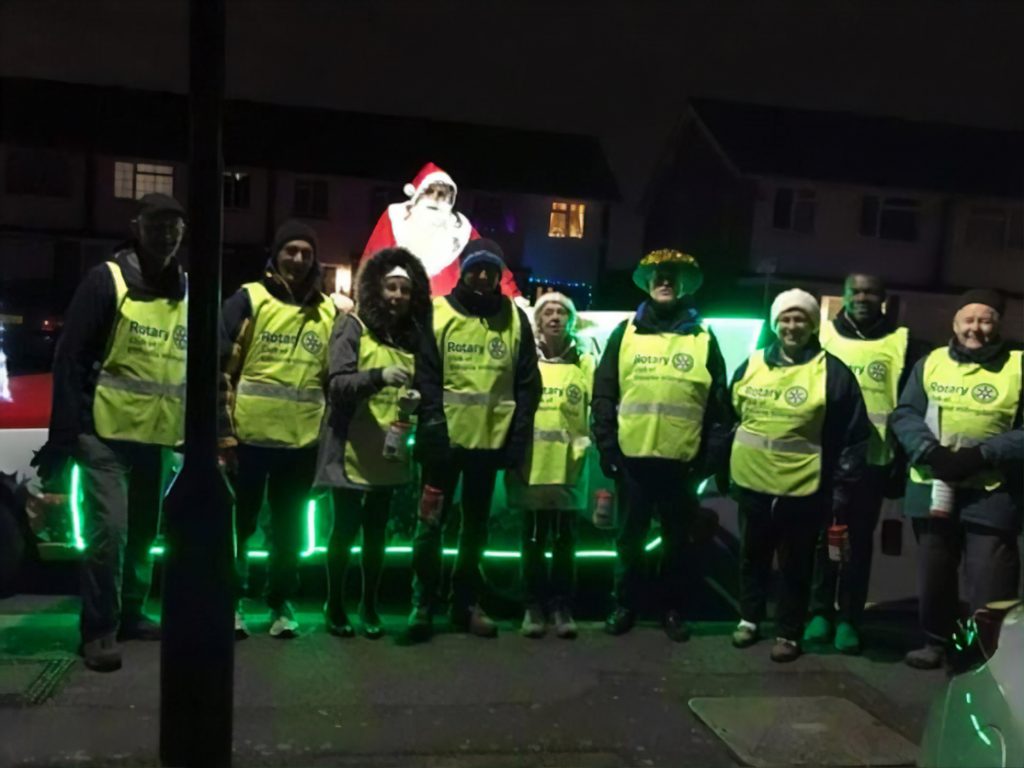 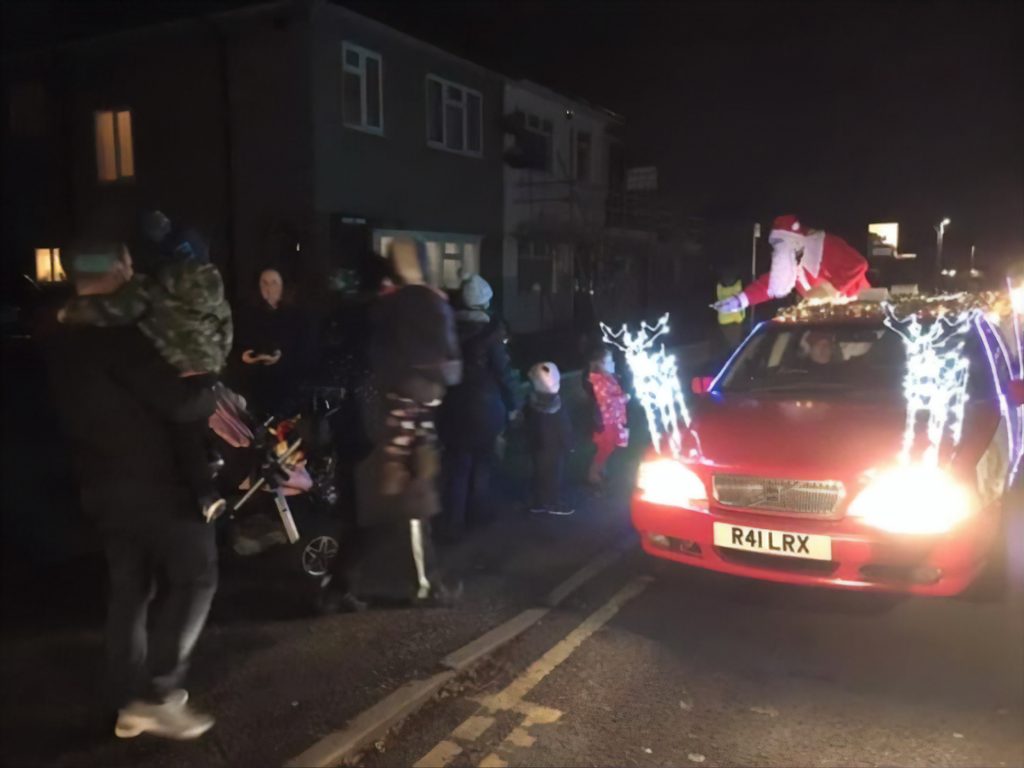 Some of the famous projects that have been at the radar of Rotary International’s list throughout the ages include: ending polio, improving water and sanitation – especially in Africa, and improving maternal health. To meet the costs/funds for these projects/programmes, different global Rotary clubs carry out fundraising events.

The funds obtained from these charity collections were projected towards the Prostate Cancer UK campaign and the newly re-opened Michael Sobell Hospice at Mount Vernon Hospital.

These two activities during the festive season gave me a real feel of how generous and community engaged people in the UK are. The average contribution was £1 or less but the huge numbers that responded enabled us to raise more than £6000.

This was my best Christmas as I met and/or interacted with more than 50 great British people during the collections, and not forgetting the turkey served, haha.’ 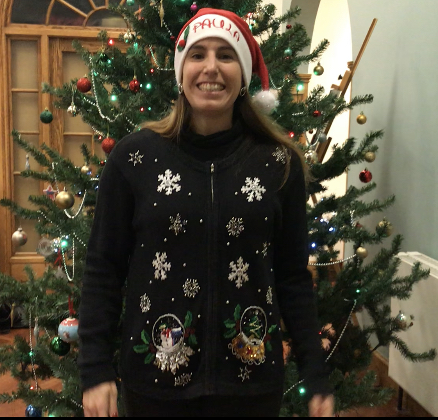 ‘In this holiday season, I strengthened my hope. Hope starts when someone gives you a chance in life. Chevening gave me a great and unique chance to study in the UK, which completely changed my life. Thus, I wanted to give a little bit of hope to people that sometimes are ignored by society, to people that need hope, and to people that need a chance.

I spent Christmas Eve with homeless people, through Crisis, an NGO that works to end homelessness around the UK. I was there from the 22:00 on 23 December to 09:30 on 24 December.

I shared great coffees, laughs, and hugs with some truly amazing people. We had great conversations full of hope and joy. Many times, we do not realise the value of a word, a deep look, or a smile but this can be more powerful than anything material.

I am not able to say if I was able to give them a little bit of hope, but one thing that I am sure of is that I strengthened my hope. There are many reasons to hope; homelessness can be ended, or at least made a brief, solvable situation. I invite everyone to never lose hope in their dreams, beliefs, and ideals.

This photo expresses my happiness and my energy of Christmas that was strengthened thanks to all the people that I had the opportunity to meet during the night.’ 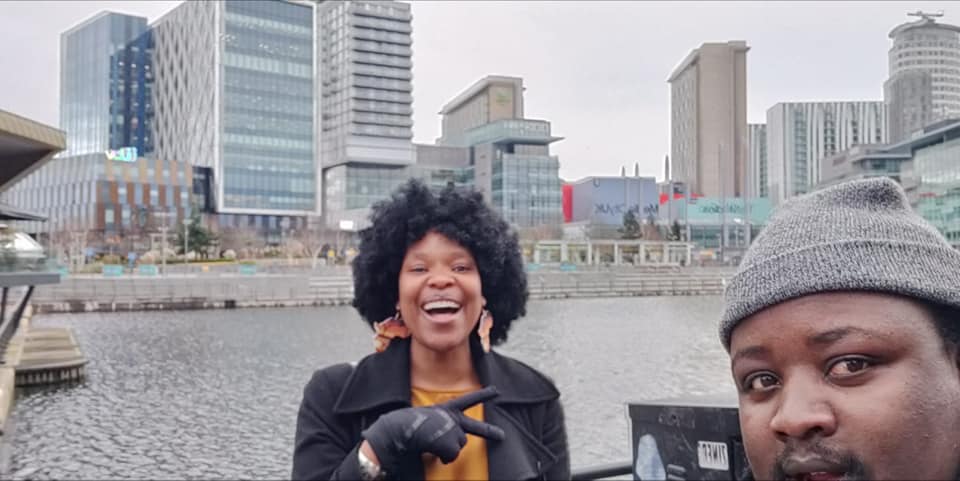 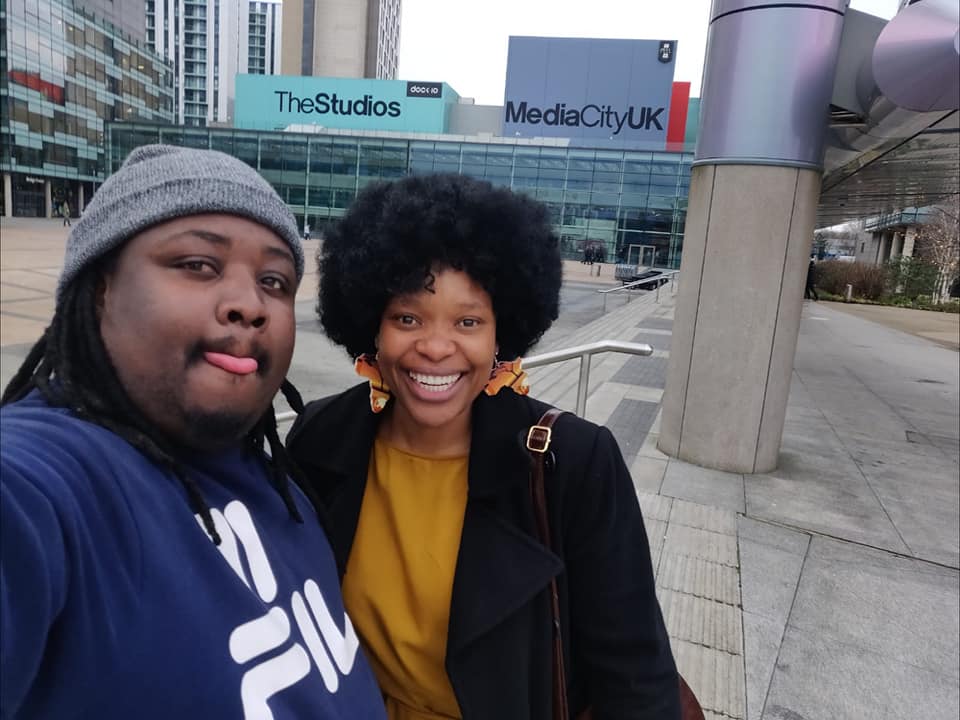 ‘My Chevening experience is a breath-taking transformative journey. After meeting the deadlines for my submissions, I embarked on a trip, to one of the destinations on my bucket list – Salford in Manchester City.

Through the UK`s affordable and convenient transport system, it took only 4 hours to get from Canterbury to Manchester Piccadilly. This was not only a memorable way to end 2019, a year that presented me with my Chevening journey, but a fashionable way to start 2020, a year of endless possibilities!

I was hosted in Farnworth, Bolton where New Year’s Eve was celebrated through a family dinner and karaoke. The first day of 2020 was an explorative drive in Salford Quays including a tour to the BBC regional headquarters for the Northwest, regarded as one of the largest BBC regions in the UK. I took the picture in front of the BBC to acknowledge to self that i witnessed where it is all broadcasted.

1 January marked a football match between Manchester United and Arsenal which would have been a lovely experience had it not been hosted in London. Still, it was quite significant seeing the Etihad Stadium in Manchester. I did feel pity for Manchester United that it lost to Arsenal though.’ 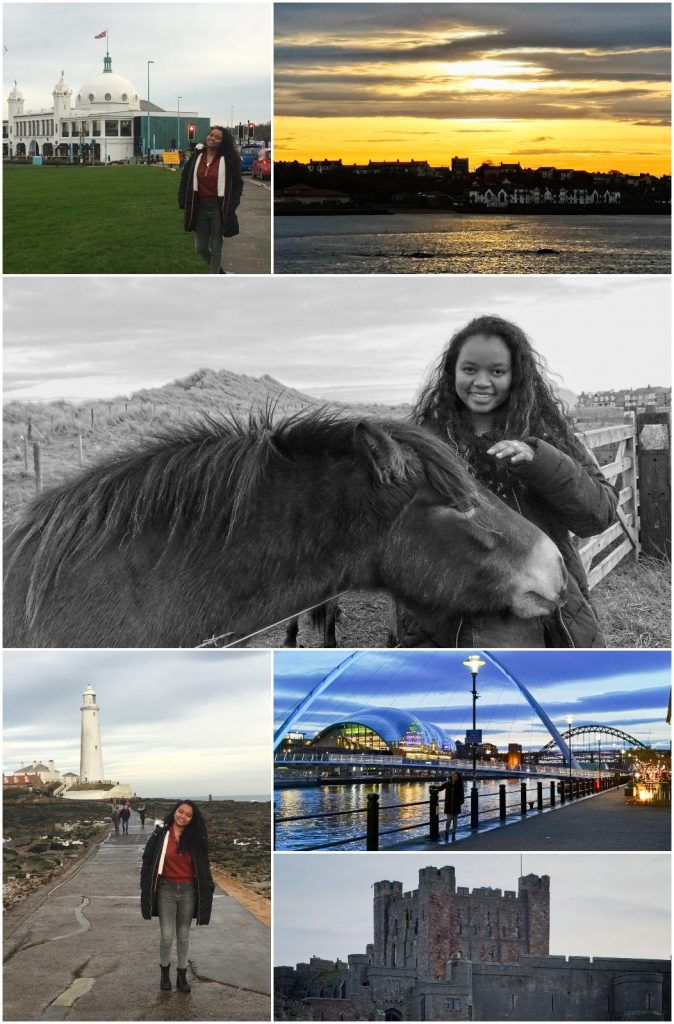 ‘During the holiday break, I decided to spend a week with a host family in Rothbury, a town in the Northumberland countryside.

During my time there, I mentioned I hadn’t seen the sea for years so my hosts took me to Whitley Bay where not only did I get to see the sea, but I was able to go to the top of St Mary’s Lighthouse, and to top it off, I got to see seals there for the first time!

In addition to Whitley Bay, we also went to Bamburgh Beach (which is wide, has a castle, and you can surf there – all positives) and on the way there, we saw two ponies near the road. I’d never seen ponies before in my life so I asked my hosts if they could stop the car so that I could touch them. It was a magical moment for me!

My hosts also took me on a trip to Newcastle too and they deliberately took me there whilst it was dark because Newcastle by day is nothing like Newcastle by night! I saw the most wonderful scene of my life with the lights changing colour, accompanied by a group of people singing Jingle Bells. The Christmas spirit was there, even though you couldn’t see a Christmas tree.

All in all, my trip to Northumberland was wonderful and filled with fresh air, lots of fresh fish, beautiful scenery, and great hosts!’

8. TRAVELLING NORTH AND SOUTH, AND THE MIDDLE TOO

‘I spent my holiday season in many cities around the UK starting with where I live; Edinburgh.  From there, I travelled to York, then to London to watch the amazing fireworks with my friends from Chevening and Iraq. After London, I travelled on to Oxford and Coventry – each city has significant features and magic to impress all.’ 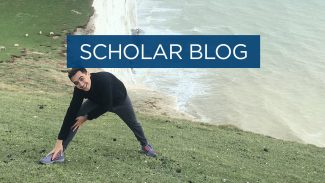 After around an eight month application process from start to finish, Chevening Scholars finally arrive in the UK in September/October – also known as autumn. And spring, summer, and/or winter depending on the day. A common message people in the UK send to one another is, ‘what is the weather like where you are?’, because […] 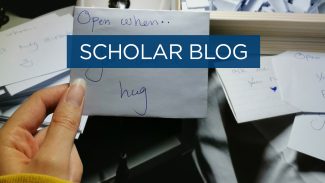 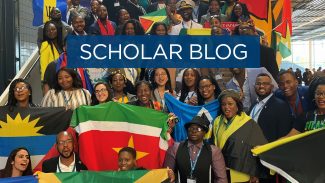 In the weeks since Orientation 2019, scholars have had the chance to step back and reflect on Orientation, and meeting 1,750 scholars from 141 countries and territories around the world. For some, the best moments consisted of seeing those they hadn’t seen since leaving their home countries, and for others, it meant meeting new people […]