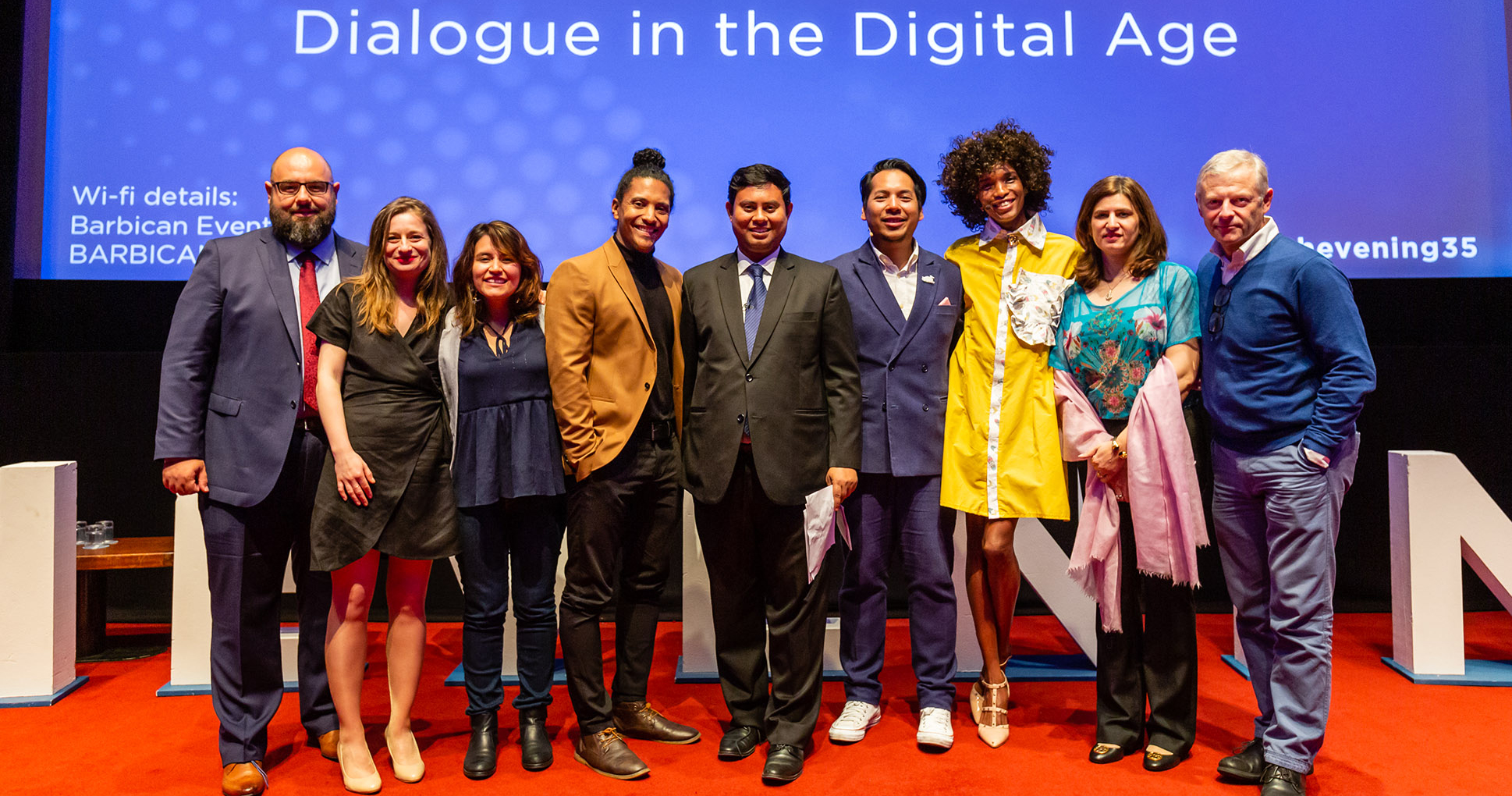 From photojournalism in Chechnya, to peacebuilding in Colombia, from challenging corruption in Malta, to co-writing books across the India-Pakistan border, Cheveners are initiating and sustaining progressive dialogue around the world.

This was highlighted at the inaugural Chevening Talks event, held at The Barbican in central London earlier this month. Drawing on their diverse personal and professional backgrounds, alumni and scholars delivered a series of inspiring talks based on the theme ‘Dialogue in the Digital Age’. These talks explored the power of verbal and written discourse (as well as other forms of dialogue) as a means of forging connections, mitigating conflict, and developing a shared understanding of the world around us. To open the evening, Interim Director of Chevening Louise Thomson welcomed the many scholars, alumni, and external guests in attendance, emphasising the importance of dialogue in the digital age:

These talks showcase the remarkable expertise and thought leadership within the Chevening network. Dialogue is of utmost importance in this day and age, and is particularly important to the FCO and their campaign to defend media freedom around the world,’ said Thomson.

‘These speakers were specially selected based on their work in using dialogue to bring the world a little bit closer together.’

The evening was hosted by Syed Farradino Omar (‘Dino’), a current scholar studying International Management at Royal Holloway, University of London. A seasoned journalist and television presenter back in Malaysia, Dino captivated the audience with his seemingly endless charm, wit, and zeal. Over the next few hours, the audience heard from a mix of alumni and scholars: Daniel Mpilo Richards, Creative Director of the Ruben Richards Foundation, a South African non-profit that focuses on psychological therapy and conflict mediation in parts of Cape Town affected by gang violence. Daniel spoke about the tragic prevalence of violence and ‘gangsterism’ in the Cape Flats, and how the creative arts can be used to steer vulnerable youth toward a more hopeful future. Lucía Mesa, a current scholar studying postcolonial studies at Goldsmiths, University of London, spoke about her work with Rodeemos el Diálogo, a peacebuilding nonprofit in Colombia that aims to promote a culture of dialogue between communities that have been torn apart by the civil conflict. Her story about a ‘healing’ exchange between an ex-member of the FARC and a woman who lost a family member to the guerrilla group left the room speechless. Emanuel Delia, a Maltese investigative journalist and political blogger, whose work focuses on investigating and challenging political corruption. Manuel gave a moving account of the death of Maltese journalist, writer, and anti-corruption activist, Daphne Caruana Galizia, whose murder back in 2017 moved him to start his own blog and continue her legacy of holding power to account. Olga Kravets, a Russian photojournalist and filmmaker who works on projects around conflict and human rights across the former USSR, Middle East, and Balkans. Olga spoke about the curiosity and thirst for truth that led her to Chechnya when she was 19 years old, and her journeys back and forth ever since. The audience was wowed by her moral bravery, having stood up to a group of Russian soldiers and challenging their misguided assumptions about the Chechen people. Katlego Kai Kolanyane-Kesupile, an artivist, writer, designer, and performance artist from Bostwana. Katlego spoke about human rights and her mission to decolonise indigenous identities. Her message, which was sprinkled with humour throughout, was both strong and clear: it’s time to use dialogue to embrace and celebrate indigenous identities; to instil dignity in indigenous legacies, practises, and knowledge. Hindol Sengupta, an award-winning author from India, closed the evening with a heart-warming talk about his long-time friendship with Pakistani lawyer, Huma Ijaz Zaman, and their story of overcoming physical and political barriers to co-write a book. He reflected on how modern technology enabled them to create a ‘living bridge’ and transcend these challenges, despite the constant threat of war between their two countries. The talk ended with a surprise that no one in the audience was expecting—Huma was sat amongst them, supporting her old friend, colleague, and fellow Chevener. As the curtain came down, it was clear that the audience was left feeling uplifted by these important stories. If you were unable to attend, the talks will be released on Facebook over the coming months.